The journey to Brentford was uneventful bar two moments. The first saw us come face to face with a swarm of Leyton Orient fans on route to Southampton on the southbound side of Fleet services. Hello to any Orient fans reading this from the away end this afternoon - I hope you are all enjoying your 'quaint' surroundings, sure beats Southampton doesn't it?!!! The second saw us nearly run over a policeman parking up. Strictly speaking it was his fault for standing in the way.

No parking at the ground meant that it was a long walk from the 'pavement under the flyover' we were parked on. It took me almost as long to actually be allowed into the ground. Due to a foot injury (I've got an 'upset' tendon to put it mildly) my pre-bought ticket needed to be changed from a terrace to a seat and the man at the ticket office said I could do it at the turnstile. At the turnstile the operator was having none of it and threw what resembled a toddler's tantrum over it. After a few minutes of him staring at the ticket, disagreeing with what I'd been told and telling me I'd have to go back to the ticket office, he saw sense/caved in and let me in, after I'd paid the difference and changed my ticket. By this point muttering profusely about Brentford, it didn't help that a steward asked to check my ticket as soon as I was through the turnstile. "This is for the terrace" she said. I nearly combusted! After a lengthy two steward discussion I was finally let up into the vertigo inducing stand.

During the warm up the appearance of number 53 Joe Heath was causing a commotion. So too were beach balls from the terrace below which ended up on the pitch and were confiscated. Their mascot, a bee, paraded around amidst cries of "Buzz off" from Marge. No sooner had the game kicked off had the ref halted play to clear a large number of balloons that had settled on the pitch. Confusion was the word of the first half. Although we were wearing black, I kept thinking we were Brentford who were wearing red and white. I spent time marvelling at Charlie MacDonalds "haircut" before realising that it was actually a bandage. And to top it all we were kicking off at 3pm on a Monday. Half time saw the announcer announce that the local rivals of both teams, QPR and Plymouth, were losing. The cheers that followed seemingly delighted him, leading him to proudly announce "I'm pleasing everyone this afternoon". The second half saw yet more beach balls confiscated. Amidst the preparations for a free kick (which George Friend came close to scoring) James Dunne took a particular liking to Nikki Bull, with some 'inappropriate pinching' going on. As time ticked on a random chant of "He's gunna smile in a minute" filtered up from the terrace below. Looking down we realised it was aimed at a rather miserable looking steward stood at the front. Chants of "steward give us a smile" followed.

The pairing of Logie and Taylor (Ryan - talk about confusing! To make matters worse from a distance he looks like Rob Edwards!!) following the substitutions of Fleetwood and Stewart just after the hour mark looked promising. Then, just 15 minutes after he'd arrived onto the pitch, Logie got injured and limped off. We played with 10 men for what felt like ages whilst his replacement Joe Burnell warmed up. In the 81st minute Ryan (Taylor!) was flagged offside in a position from which he was almost certain to score from. Cue Marge, pointing to the barrier we were sat behind, "I was nearly over there then". Into the last few minutes desperation reared its head in the away end. The slightly unorthodox tactic of "KICK HIM JOE" was being called for by one man. Time ran out on us in the end. Although I would have loved us to win (I'm desperate to write about an away win at some point in 2010!), a point is better than nothing. As a well known supermarket says, "every little helps".

I'd like to sign off today by saying get well soon to Adam Stansfield. He's spent some time in hospital recently and I'm sure I speak for all City fans when I wish him a speedy recovery. 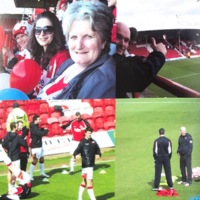 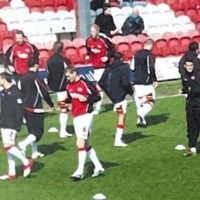