Swindon. What a night. The journey up went without incident and we successfully navigated ourselves around the magic roundabout (for those of you unaware - 5 mini roundabouts as one, where as a result you can legally be driving around the wrong way) and were dropped illegally (more of that later) at the entrance to the car park. From here we had to walk the entire perimeter to get to the away end. On route I was stopped by a sky cameraman as he was interviewing a Swindon fan. When finished he ushered me into shot before the interviewer looked at my shirt and patronisingly said "wrong shirt we don't want to speak to you". I said "that's discrimination". The cameraman apologised.

Once through the turnstile it was up an unnecessary amount of steps and through a fire door to get to the stand. Here I went to the nearest steward and told her that I wanted to put a banner up in the empty stand behind the goal. She said no. It was amazing how quickly she changed her mind when I told her I'd spoken to the stadium manager about it prior to the match. Me and my Mum were then escorted, back down a similarly unnecessary amount of steps, to the vacant stand where we unfurled our 'STANNO' banner. It will be going to every away game until Stanno returns. Retaking our seats we looked over to the stand, where the wind was whipping the banner and the other flags around, and saw that the electronic scoreboard was displaying "get well soon Adam Stansfield" which was a lovely touch. Some time later Marge arrived. She wasn't happy, and rightly so. Their bus had not dropped off where we had as it wasn't actually allowed. As a result she had had to walk from "some college miles away" which meant little at the time, but I can assure you it did later... She was cheered however from a wave from Bertie and a kiss from their mascot, a Robin, who came up into the stand to shake hands with the few, well Marge mainly, who were willing.

And so to the match. No doubt a somewhat larger percentage of you than usual saw the game owing to it being on Sky. Thankfully it was more shades of Leeds at home than Brighton away and City played excellently. At the end of a tremendous first half we took the lead. Euphoria swept the away end. Marge nearly lost her hat. The second half saw City come under continual pressure all of which was majestically dealt with. I thought we were going to do it. We were playing with such strength and determination it felt like with all the will in the world Swindon just didn't stand a chance. It was going to be our day, and I was finally going to be writing about an away win! By the time the 5 minutes of injury time board went up I felt sick. I felt sicker when they scored. It was heartbreaking. The final whistle that followed soon after was tinged with both pride and disappointment.

A kind steward let us sneak out the side gate once collecting our banner meaning that we missed out all the steps. Outside we weren't allowed to walk the way we had come in, and instead (in shades of Cambridge away) we were sent through a field (there were no cows in this one though), and along a road back to the magic roundabout. Here it quickly transpired that we had more chance of seeing Dougal and Zebedee than our bus and driver. It was nowhere to be seen. Sometime later our driver casually strolled up, without the bus, to tell us that he wasn't allowed to pick us up and the bus was at the college. Mid way into the 10 minute walk I began to see why Marge had been so annoyed. Finally back to the bus, we were homeward bound. Or were we? A missed turning saw us heading towards LONDON on the M4. We (and unfortunately those who chose to follow our bus out of Swindon) had to travel a considerable distance in the wrong direction before we reached the next junction and were able to get back on the right side of the road. At 10.50pm, a good hour and a quarter after the game had finished we made it back to Swindon. We got home eventually. 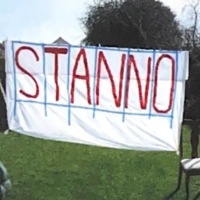 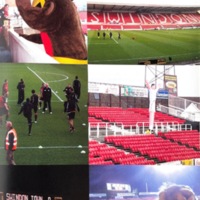 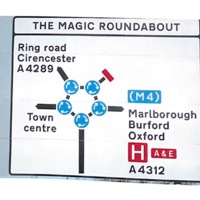