Some would think that travelling to Hartlepool and back in a day would be about as enjoyable as sticking pins in your eyes. However, last Saturday this was not the case. We left Exeter at 6am and before 7am donuts were being eaten, Marge had done a can-can down the aisle, and asked the driver to turn the heating down as, as she put it, "the custard in my donut is melting". We arrived at Hartlepool, slightly dazed, at just gone 1pm. After cheering the team into the ground we went to see the police horses, Alf and Reg. The police officer was surprised to hear we were doing the whole journey in one day. He suggested we stay in Hartlepool instead and offered to take Marge out after the game. "What are you going to do with the horse?" Marge asked. "I finish at 6" he replied!

Inside the ground we were told we had to sit in our allocated seats. This always causes more problems than the 'sit where you like' strategy does. I berated the stewards at length for the common sense bypass, mainly because poor Marge was sat behind a pillar and couldn't see the goal at the opposite end. As she put it "I didn't come all this way to spend 90 minutes looking at a pillar". In the end we all rebelled and sat where we wanted to.

Just before kick-off Eric the (cursed) flag was unveiled. Unfortunately this coincided with H'Angus the Monkey's arrival at the away end so I didn't get to see him. We will therefore never know if he beat Southends Sammy the Shrimp and Elvis J.Eel in the best mascot stakes. [I stripped Tranmeres 'Rover and puppies' of the title as soon as I found out that they had beaten Millwall!]

The first half was glorious. City were playing really well and things were looking good. We went 1-0 up just before half time through a Matt Taylor goal. In my favourite away moment of the season, whilst the majority of the team were celebrating with Matt at the opposite end of the pitch, Rob Edwards (my player of the season) turned to the euphoric away end and punched the air. We really felt it was going to be our day. Unfortunately this was not to be the case. In the second half Hartlepool stepped up a gear. I learnt the hard way not to eat a mint during a tense football match. Hartlepool nearly scored and I started choking. I came close to needing the Heimlich manoeuvre! City hung on in there but not for long enough. In the 80th minute they scored. The away end defiantly kept the faith and raised the roof for City. Late on Marcus Stewart hit a shot as high as our hopes had been pre match. He was in a position from which a player of his calibre seemed certain to score. Frustrated responses followed. City kept on trying but the final whistle came too soon. As if the long journey home awaiting us, not winning, and learning that those teams around us had won wasn't enough, we had to shuffle slowly out of the ground to the strains of "we're all going on a summer holiday" as Hartlepool celebrated their survival in League One. It obviously didn't mean much to their fans as by the time the team came out for their lap of honour the stadium was all but empty.

Back on the bus many were still resolutely optimistic. Those of us who had witnessed the ease with which Huddersfield comprehensively turned us over in the first half of the season were not so sure. Despite our somewhat uncertain future and fluctuating levels of optimism, the journey home was an enjoyable one. Marge even learnt to text! We arrived back in Exeter just after 12 having spent 14 of the preceding 24 hours on a bus! Dedication or madness? I can't decide! One thing's for certain though, I wouldn't have wanted to have been anywhere else.

The time has come to pray to the Footballing Gods, cross everything and just hope. Locking Jordan Rhodes in a cupboard would probably help too. Whilst I wish Huddersfield all the very best in the plays-offs - they are a phenomenal football team with a beautiful stadium - I hope that you will be leaving SJP unhappy come 5pm. As fellow football fans I'm sure you'll forgive me for such sentiment. I've had enough lows for one season. Let's end on a high.

COME ON YOU REDS! 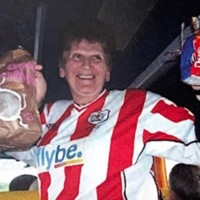 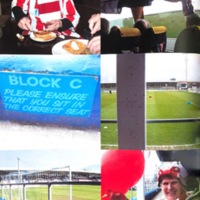 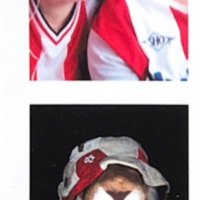