Mike Lester started his career as an apprentice with Oldham Athletic, earning a full contract in August 1972 and going on to score two goals in 27 league appearances.

He was transferred to Manchester City in November 1973, but only featured in two league games for them. After a loan spell with Stockport County in August 1975, Mike played for Washington in the U.S.A. On his return to England he signed for Grimsby Town in November 1977 where he netted 10 goals in 48 league outings.

Mike moved on to Barnsley in October 1979 where he added another 64 league appearances and 11 goals. Moving to Exeter City in August 1981, Lester made his debut in a 1-1 draw at Huddersfield Town on the opening day of the season. He scored 4 goals in 19 games for the Grecians, including a hatrick against Millwall at home in October.

Despite being a regular in the team, and admitting that they were “nice people’ at Exeter, he wanted to return to the north and got his wish when signing for Bradford City in February 1982. After 2 goals in 49 appearances for the Bantams, his next ‘stop’ was at Scunthorpe United who he joined in March 1983. He had quite a successful time there making 109 league outings, scoring nine goals. He was to also play on loan at Hartlepool United, and eight months later in September 1986, secured a move back to one of his former clubs, Stockport County. After just eleven appearances at County, he then played in Sweden with Ludvik FC.

His last Football League club was to be Blackpool, signing for them in December 1987, but after 11 League appearances and one goal he was released on a free transfer to join Chorley, and later having a spell at Mossley. Moving into the management side of the game, he has since taken charge of Runcorn, Curzon Ashton, Chadderton, Atherton Laburnum Rovers, Abbey Hey and Rochdale Town (appointed September 2008 - left April 2009). 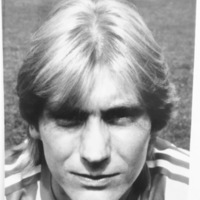 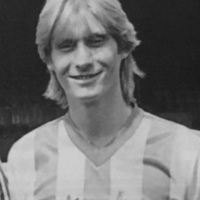 Mike scored 4 goals for City. He got his first at Gillingham on 26 Sep 1981, then scored a hat trick home to Millwall in 5-4 win on 3rd October. I have the Sunday Independant cutting.