Phil King began his career as an apprentice with Exeter City in May 1984, turning professional in January 1985, and making his league debut the following month in a 1-0 home win over Halifax Town.
Although he didn’t win a regular first team place at St James’ Park, Torquay United were happy to pay a fee of £3,000 for the player in July 1986.

They were to make a quick profit on the defender, for just 24 league games and three goals later and in February 1987, Phil was sold to Swindon Town for £25,000.
At Swindon, his career really took off, scoring four goals in 116 games, culminating in England Under-21 and ‘B’ honours and a £400,000 move to Sheffield Wednesday in November 1989. He played in the 1991 Football League Cup Final for Wednesday as they defeated Manchester United, 1-0.

Phil had a loan spell with Notts County in October 1993 and then joined his former Wednesday manager, Ron Atkinson, at Aston Villa for a fee of £250,000 in August 1994. He joined West Bromwich Albion on loan in October 1995, but two months later suffered a serious cruciate ligament injury, from which took him 17 months to recover.

Phil rejoined Swindon Town on a free transfer in March 1997, and then played on loan with Blackpool. He eventually left Swindon on a free to link up with Brighton & Hove Albion in March 1999, but only made three appearances before being released at the end of the season. He was offered a monthly deal by Chester City, but turned that down to sign for Kidderminster Harriers, who he helped win the Conference championship in 1999-2000. After one season with Harriers, Phil became a part-time player with Bath City so that he could run the Dolphin Hotel in Swindon. He was to play just one game for Bath before it was reported that he was forced to retire from playing as tests on his knee injury had shown cartilage damage and early signs of arthritis.
In March 2004, King did play one more game, for Cinderford Town, but then became a commentator covering Swindon Town matches for BBC Radio Wiltshire, whilst still running the Dolphin Hotel in Swindon. 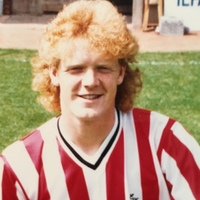 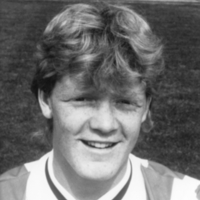 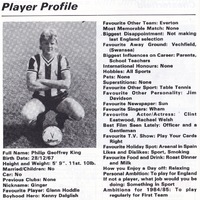