Games in the Conference football are often plagued by the long ball, poor referees (this game was no different) and two awful teams struggling to put a few passes together. But the encounter at Woking provided unrivalled entertainment up there with the best Exeter City games I have witnessed.

92:32 minutes into the match, the ball was smashed forward and nine blue City shirts piled towards the Woking goal. This was the last chance. 3-2 down to Woking, away from home in the rain, after leading the game twice, it was now or never. Poor defending looked to have cost us the game until Steve Flack was called from the bench. Deprived of a starting place by new signing Jake Edwards, Flack came on with 10 minutes to go and had his chance to shine. And he took it. He rose, like only Flack can, to amaze the away fans with a perfect looping header into the top corner.

As the jubilant City fan on my left shouted during the chaos that is an Exeter goal celebration. This is what makes football great. He was right. The passion, excitement and raw emotion were evidence of why football is the most loved sport in Britain. It had all started so well for Exeter. The large away following had something to cheer about with only four minutes on the clock. Dean Moxey, in for Alex Jeannin, had a brilliant first half and it was his corner that was nodded in by Santos Gaia at the far post. At 1-0 up we couldn't have imagined the drama that was still to unfold. 500 or so fans made the 150-mile journey and were in vocal mood. Recalling matches against Woking last season we knew we would be facing a formidable line up. The Woking attack especially, made life hard for the Grecians. Ricards, Ferguson, Foweya and Nade were part of the powerful and quick Woking front line, who proved to be a constant threat to our back four.

It was very predictable. Exeter aren't  masters of the 1-0 win, and after throwing away a one goal lead th weekend before, it was always going to be a struggle to keep Woking at bay. So when lan Selley powered a penalty past James Bittner it was an all too familiar scene. Within four minutes of falling behind we were celebrating again as City got their noses in front. Jake Edwards nodded a beautiful cross from Les Afful in from six yards. It was Edwards1 first goal for the Grecians and an instant reply from Exeter. Edwards and Devine battled well throughout the game, Devine was unlucky with some optimistic long-range efforts and could have scored himself when he stooped to head a Sheldon cross just past the post. We could see it coming. The City midfield, along with the defence, struggled to push forward, come towards the ball and invited the pacey Woking attack to run at them. An invite they gratefully accepted when a powerful finish from Steve Ferguson equalised. City were holding out, but on 84 minutes disaster struck when a lovely 18 yard curling effort from lan Selley gave the home side a 3-2 lead.

But this thrilling encounter took another dramatic turn, whilst we were still celebrating another Flack attack, James Bittner was forced to make a fantastic save low to his left to deny Woking a very late winner. The away fans went mad and made the journey back to Devon, for the Exeter faithful, a lot easier. 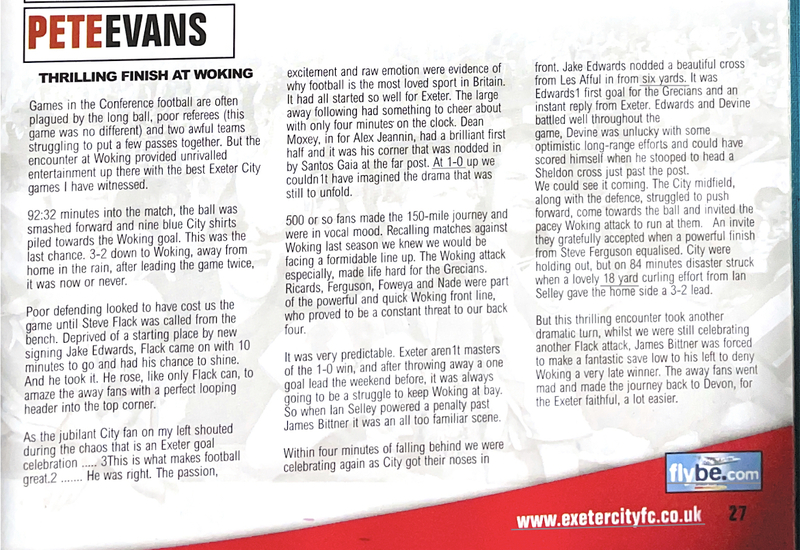