FLACK LEAVES THE GROUND AT HALF-TIME

City's Burnley based supporter reports on the win at Northwich Victoria.

At last the new season was here! Having had to endure trial by Sky Sports' vidiprinter for the opening match against Morecambe, and even worse scenario of only finding out updates for the Woking game on my mobile phone every fifteen minutes (I work on night shift), I couldn't wait to finally go and see the Northwich v City match 'live'. My friend and fellow North-West Grecian, Brian, arrived at about 11.15am, so with plenty of time to spare before we hit the road, a cup of coffee was despatched while catching up on all the news. We set off at noon in glorious sunshine with barely a cloud in the sky, however by the time we joined the M60 the skies were darkening and while circumventing Stockport the heavens opened and turned the motorway to a river within seconds. Luckily it only lasted a few minutes and was replaced by the previous blue skies and sunshine.

We arrived at Wincham at just after 1.00pm and were directed by the car parking attendant to make sure that we parked up on the right side as there were some big puddles in the car park. He wasn't kidding either, as we turned the corner into the car park, I briefly thought we had made a wrong turn and were on Blackpool front - in the words of Samuel Taylor Coleridge, there was "Water, Water everywhere, and not a drop to drink"! It was virtually one big muddy puddle, complete with a burnt out car at the far end was this how the local fans treated - visiting supporter's cars after they lost?! We walked around to the social club, past an open exit into the ground and were surprised to see just how good the pitch looked. Even at this early time the Grecian faithful far outnumbered the Vic's fans, with North Devon contingent already propping up the bar! While we were in there, the City team coach went past, sadly resplendent in the colours and logos of a (in)famous Cornish pasty maker. Fancy having to travel in that!

We walked around to the turnstiles and couldn't believe what was written above them "Adults £6." Whey Hey, this was going to be a cheap day out, but alas this was for visitors whose teams were playing against Witton Albion, not Northwich Victoria. The usual fee of £9 was handed over to the turnstile operator, and we were in. The ground is a typical non-league ground with an open home terrace, behind one goal, a small covered away terrace behind the other, a seated stand running three quarters the length of the pitch to our right and a covered terrace on our left, all very reminiscent of Tamworth's ground. I get more nervous watching my first City match of the season than do sat at home watching the vidi-printer on the opening day of the season! The 300 or so City fans gave the lads a rousing reception as they emerged into the sunlight. The match kicked off with City attacking the far end and after ten minutes, Sean Devine and a Vic's defender chased a long ball. Ralph, the Northwich keeper came rushing out with the intention of clearing his lines, but alas the defender hadn't read the script and nodded the ball back to where he thought his 'keeper was! Instinctively, Ralph stuck his hand out to catch the ball but apparently his momentum had carried him out of the penalty area and referee Mr Foster was left with no choice but to send him for an early bath. Devine tested the replacement keeper from the free-kick, but Ben Connett was just up to the job, scrambling the low effort around the post. A couple of corners were confidently dealt with by Connett and suddenly the thought that had I had been trying to repress of "How often do 10 men play better that 11" was brought to reality. Santos tried a spectacular overhead clearance, but only succeeded in slicing the ball badly and ending up on his backside, and Paul Brayson was left in the clear with only Bittner to beat. The City fans behind the goal held their breath as the ball seemed to take an age to come down, but sadly Brayson made no mistake, coolly slotting the ball into the corner from about twelve yards out. With half-time looming and the prospect of facing Eamonn's equivalent of "The Hairdryer" the Grecians started to step up half a gear and forced a corner. An Alex Jeannin corner seemed to be fumbled by the 'keeper and the ball fell kindly (for a change) to Santos who atoned for his earlier mistake by stabbing the ball home through the melee, so that the teams went in level at 1-1.

Half time entertainment was kindly provided by Steve Flack! After a ball got hoofed over the terrace during the warm up for the substitutes, Flacky ran over to the advertising boards, vaulted into the City fans and ran out of the open exit to cries of "You can't go home yet", "The toilets are over there" and I couldn't resist a shout of "No, you can't have a meat pie" which was met with a big grin from the man. He came back with the ball, chatted to a few of the fans and returned to the pitch - bet you don't get that at Stamford Bridge or Old Trafford!

City started the second half brightly with both Devine and Cronin going close and then Jake Edwards had a great chance when one on one with the goalie, but sadly pulled his shot across the goal and wide of the far post. With nearly an hour gone, cometh the hour, cometh the man. Scotty, exchanged neat passes with Les, found that he wasn't being closed down, looked up and pulled the trigger from the best part of thirty yards. Once again the City faithful held their collective breath and the ball arrowed into the bottom corner with Connett left grasping at thin air. An early contender for goal of the season and one that sent all the fans jumping for joy. City continued to create some great chances with Cronin producing a great finger tip save and Moxey, Devine, Jeannin and Flack (who had replaced Edwards) all going close. As the last ten minutes approached those dark thoughts started to surface and with Chris Todd having to limp off with an injury, one or two worried faces could be seen on the terraces. Finally, the referee blew his whistle and the first win of the season was in the bag. Eamonn and the squad came over to soak up the applause. We made our way out into the car park and were relieved to find that no other cars had been set fire to and made our way back to Burnley, and Brian then left our house for Cumbria. 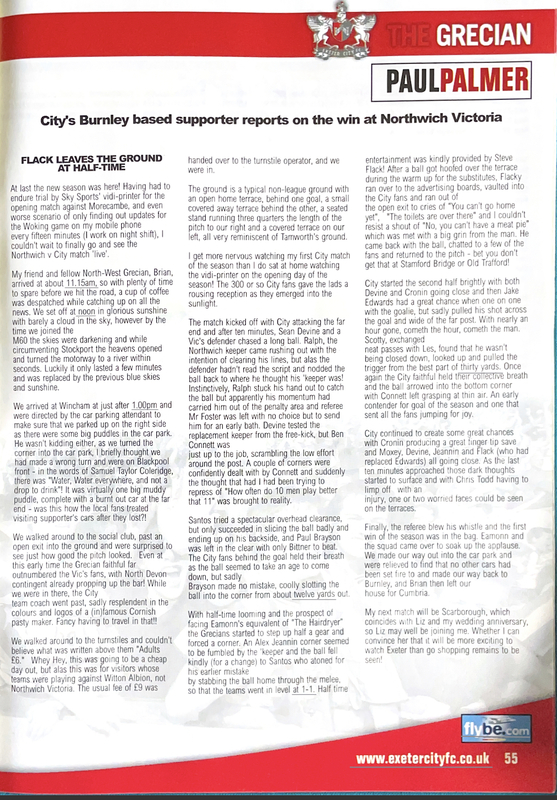