Newcastle United's St James' Park (Not to be confused with Exeter City's St James Park) is an all-seater stadium located in Newcastle upon Tyne. It has been the home to Newcastle United since 1892, although the ground has been used to play football since 1880.

Due to St James' Park's large seating capacity of 52,405, the ground has been used for more than just club football purposes in recent years. For instance, international games have been hosted by the renowned stadium during the 2012 Olympics. Meanwhile, St James' Park has also accommodated a range of events from rock concerts to rugby matches.

City have only ever played Newcastle once, during an FA Cup tie in 1981. Although City drew 1-1 to the Magpies at Newcastle, Exeter went on to defeat them 4-0 at home St James Park. 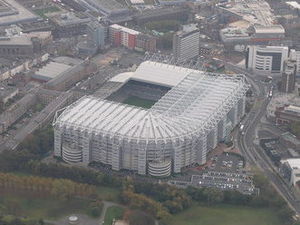