On the books at West Ham United as an amateur, Joe Gadston gained his first professional contract at Brentford in August 1964. However, he never made the first team at Griffin Park and then joined Southern League Corby Town where he scored 6 goals in 12 matches.

Cheltenham Town then signed Joe for the princely sum of £22 and ten shillings. During his stay at Cheltenham, he netted around 40 goals for the club. Bristol Rovers gave him a route back into the Football League as they signed Joe in May 1968 for a fee of £1,500. He went on to make 11 league outings, scoring five goals. Exeter City signed him in November 1969 for a reported fee of £1,000 after the player had turned down a move to Nuneaton Borough. Joe was to enjoy the best spell of his career. Making his debut against his former club, Brentford, at St James’ Park, Gadston went on to score 9 goals in 26 appearances in his first season. He was to form an excellent partnership with Alan Banks in 1970-71, as he scored 18 times in 39 outings (Banks scored 21 goals). However, the 1970-71 season didn’t prove as good and he was in and out of the side.

Joe had a one month loan spell with Poole Town in January 1972. Released on a free transfer, he joined Aldershot in July 1972, but he was to only feature in four league games for them.

He also had a short spell on loan with Hartlepool in February 1973, playing just the once. After just one season with the Shots, he signed for Wimbledon.

He then worked as a youth coach at Brentford, when Steve Perryman was manager.
The Wimbledon former players website has the following information.

“Gadston began his career as a youth and amateur player for West Ham United, before moving to Third Division club Brentford, for whom he failed to make a first team appearance and instead played for the reserves. He had a brief spell with Corby Town before joining Southern League club Cheltenham Town for a fee of £22 and 10 shillings. Gadston is cited as one of the greatest players to play for the Robins. Gadston moved back to the Third Division to join Bristol Rovers for a £1,500 fee in 1968 and finally made his professional debut, but he only completed one season with Rovers. His most prolific spell came with Exeter City, whom he joined in November 1969, before moving to Aldershot in July 1972. After a brief loan spell with Hartlepool in February 1973, Gadston dropped back into non-league football with Wimbledon later that year. Gadston had a spell as manager of Swanage Town & Herston. He later returned to Brentford as youth team coach. Gadston ran a holiday apartment business in Dorset and served the community by running a youth football club and a ping pong tournament for pensioners.”

Joe, who moved to live in Dorset where he ran a successful business, later became a director at Exeter City and asked Steve Perryman to help the club out as an adviser. 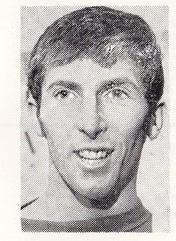 I am trying to find some film footage of Joe Gadston for his birthday. Could you help? I have tried BBC to no avail. I would be happy to pay. Thanks

We would love to have helped, we do have a great deal of film, in many formats, that needs digitising. But none currently of Joe. His goal against Crewe would be brilliant to have on film.