Starting his career with Wimbledon as an apprentice, Gayle earned a full contract in October 1984 and featured regularly in the Dons first team, making 83 league appearances.

Gayle was once again a first team regular, adding a further 58 league matches to his career tally, but in September 1991, Sheffield United parted with £750,000 for his signature.

The defender had nearly five years at Bramall Lane, during which time he featured in 118 league matches, scoring nine goals.

Given a free transfer, he eventually signed for Exeter City in August 1996.

Gayle made his Grecians’ debut against Mansfield Town at Field Mill on the opening day of the season.

Although he played in the opening ten league games, Gayle was on the move again in October 1996, signing for Rotherham United.

His stay there was also a short one and in March 1997, he moved to Bristol Rovers, where he went on to play in 24 league games.

His final League club was Shrewsbury Town, signing for them in December 1997 and playing in 67 league matches.

After leaving the Shrews on a free transfer, Gayle linked up with Telford United in March 2000 and remained there until the end of the 2000/01 season. 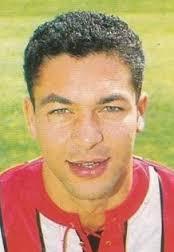