After playing for Wallsend on Tyneside, Graham signed for Stockport County in the summer of 1911. He stayed at Edgeley Park until the end of the 1920-21 season, with his career put on temporary hold for the duration of the First World War.

After scoring three goals in 86 league matches for Stockport, he signed for Exeter City, making his debut for the club in a 2-0 defeat at Portsmouth in September 1921.

He was to remain at St James’ Park just for the one season, when he signed for New Brighton. He later played for Ashton National. 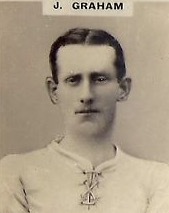 This is my grandad my mum's dad. After playing football he was a paint and decorator. Just found this app.