Serving with the Royal Navy during the Second World War, Granville played for Raith Rovers during the 1944-45 season and Cliftonville in 1945.

He was back with his home town club of Newport County also in 1945 and appeared in the war-time League South for them.

Moving to Exeter City in October 1946, along with his County team mate, William Owen, Granville made his debut for the Grecians against Reading at Elm Park. he went on to feature in 13 league matches for City that season.

The following season saw Granville net one goal in seven starts. In December 1947 he had been the subject of a transfer enquiry from Yeovil Town, but preferred to stay in the Football League.

Released on a free transfer in the summer of 1948, he signed for Gillingham. He didn’t make a first team appearance for them though and by the 1949-50 season was playing for Gloucester City.

Moving to Llanelli in 1953 and then going on to appear for Chepstow Town, Granville lived in Newport until his death in March 1993. 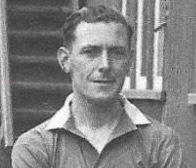