Exeter City youngsters performed well in their opening group game of the Checkatrade Trophy, but ended up falling to a 4-2 defeat to Oxford United at the Kassam stadium.

Goals from Tyler Roberts, Chris Maguire, Ryan Taylor and Alex MacDonald made the difference against the injury-hit Grecians who at times looked dangerous against the League One outfit.

The Grecians made six changes from the weekend’s clash with Portsmouth, the most eye-catching one being manager Paul Tisdale naming himself on the bench to further highlight the current injury problems hampering the City squad.

Oxford made an early breakthrough with Roberts shooting from outside the 18-yard box, to fire into the top left corner leaving Olejnik with little hope of saving.

If City were going to fight their way back into the half then it would most likely come from the hard running of Joel Grant and Liam McAlinden, the latter having City’s first shot at goal in the 15th minute, but the striker was unable to find the target.

After the half hour mark City began to claw their way back into the tie with Connor Riley-Lowe an obvious outlet for the Grecians on the left hand side, the winger looked dangerous throughout and cause the Oxford defence problems running beyond.

City were then almost gifted a way back into the match after a defensive mix up found Matt Jay, who impressed on the night, in a good position in the box but was crowded out well and Grant’s follow up attempt was deflected for a corner.

For all of their hard work City were then dealt another blow as Ryan Taylor was brought down in the penalty area on 35 minutes by Matt Oakley. Striker Chris Maguire then stepped up to coolly finish past Olejnik.

The Grecians kept their heads up though and continued to press and were rewarded close to half time as McAlinden found himself in space to cross low for Jay, who met the ball to slot past Simon Eastwood from close range.

Going into the break Appleton’s side were aware that they would have to improve in the second half if they were to win their first group game of the tournament.
City began the second half well with Ethan Ampadu replacing Oakley.

The Grecians drew level after good play from Jay in the middle who then clipped a delicate ball to McAlinden for the striker to chip over Eastwood.

The home side then began to make the most of their possession and regained the lead after 69 minutes. A curled left footed strike from Taylor found its way past Olejnik who could do little to prevent it.

With the Grecians tiring it was then left to substitute MacDonald to confirm the victory for the U’s as he cut in from the left wing to strike a sublime effort into the top corner just minutes later. 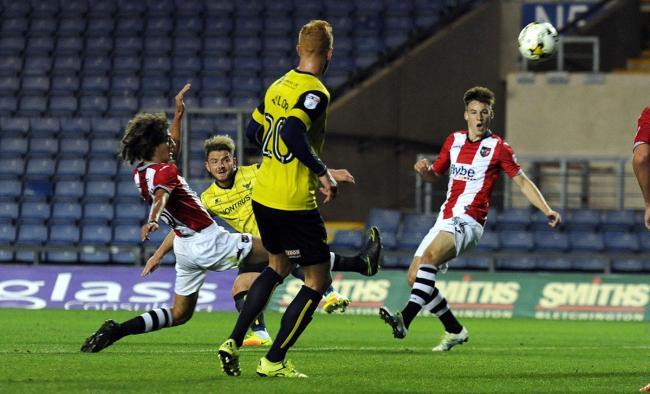