The Grecians snapped up goalkeeper Bobby Olejnik on June 2nd 2015 following the expiration of his contract with former club Peterborough United.

The Austrian stopper was born in Vienna in 1986, and played at youth level with local side Austria Vienna before Aston Villa secured his services in 2003. Bobby never managed to break into the first team at Villa Park, but did gain the experience of working alongside Danish international Thomas Sørenson and Stuart Taylor, enjoying some invaluable time working with some top-class goalkeepers at an early age.

After a brief spell out on loan at Lincoln City, Olejnik was released by Aston Villa manager Martin O'Neill, so he headed north of the border to Falkirk, where he would play alongside another international goalkeeper in Dutchman Tim Krul. He made over a hundred appearances across four years with the Bairns, before being released by manager Stephen Pressley in 2011.

Former Grecian Martin Ling took Olejnik to Torquay United following his departure from Falkirk, and his time at Plainmoor went so well that he was signed by Peterborough United in a big-money move at the end of a season that yielded a place in the PFA League 2 Team of the Year.

Numerous records and achievements were set by Olejnik in his time at London Road, not least a Football League Trophy win in 2013/14, with the Posh's Player of the Year award also coming in that same year. He set Peterborough's record for the number of clean sheets kept in a single season that year with twenty-two.

After being told he was surplus to requirements with the Posh, he spent much of the 2014/15 season out on loan at both Scunthorpe United and York City, and made a free transfer to Exeter City at the end of the campaign.

He made his competitive debut for the club in the 2015/16 season-opener, a 3-2 win against Yeovil Town at St. James Park, before keeping his first clean sheet in the goalless draw with York City two weeks later. That would be the first of four home clean sheets in a row, taking him up to the 1-0 win over Hartlepool in September. Two away clean sheets would come in successive trips to Stevenage and Cambridge United in late-February/early-March. Bobby was named Player of the Season by both the East Devon Grecians and the North Devon Grecians at the end-of-season awards, and came second to Lee Holmes in the overall fans' vote. He was released by Exeter at the end of 2016/17.
On the 8th June Olejnik signed for Mansfield Town. 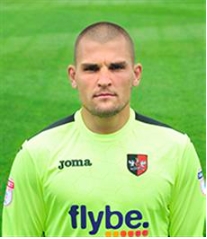