The striker, who began his career on schoolboy terms at Norwich City, joined non-league side Cambridge City in 2002 in pursuit of first team football. Simpson’s spell with the Lilywhites proved to be a fruitful one as he notched forty-two goals in 113 appearances to attract the attention of Cambridge City’s neighbours, Cambridge United.

After a slow start to his United career which was hampered by injury and full-time study at Loughborough University, Simpson hit the goal trail in the second half of the 2007/08 season, finishing with seventeen goals in thirty-three appearances. A fan-favourite for his hard work off the ball and his goal-scoring exploits, Simpson was recognised for his efforts in the 2007/08 campaign as he picked up the Supporters’ Player of the Year award. Despite the U's' best efforts to tie down the Poole-born forward for another season, Simpson joined Ian Dowie’s Coventry City at the start of 2007/08.

Following a two-year spell in the Midlands which began with a goal five minutes into his debut match against Notts County, Simpson left Coventry to join Huddersfield Town in June 2009. After a difficult first season with the Terriers, he joined Brentford on loan for the duration of the 2010/11 season and scored four goals in eighteen starts.

In spite of hitting some decent form during his spell at Griffin Park, Simpson found himself on the fringes of the first-team squad at Huddersfield following his return, and joined Oldham Athletic on loan in September 2011. The loan move was a success as he netted three league goals in addition to spectacular strike in the Third Round of the FA Cup against Liverpool to secure a permanent move to the Latics in January 2012.

Simpson joined Leyton Orient in 2013 having notched up a half-century of appearances in an Oldham shirt. He appeared on the bench for the 2014 League 1 Play-Off final, but found himself surplus to requirements at the Matchroom Stadium that summer, opening up the possibility of a return to previous club Cambridge United.

On 9 June 2014, Simpson re-joined the newly promoted fourth tier side after a seven-year spell away from the club. He netted twelve times during sixty-seven appearances before leaving the U’s by mutual consent at the end of the 2015/16 season.

On 25 May 2016 Simpson signed with League Two club Exeter City. He was released by Exeter at the end of the 2017–18 season after playing 37 league games

On 9 July 2018, Simpson signed a short-term deal to join newly-relegated League Two club Milton Keynes Dons.
He scored his first goal for the club within a minute of coming on as a second half substitute in a 1–1 home league fixture against Grimsby Town on 21 August 2018.
On 22 November 2018 manager Paul Tisdale revealed Simpson's contract with the club had been extended until the end of the 2018–19 season. 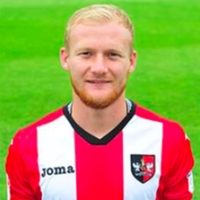 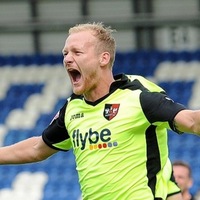 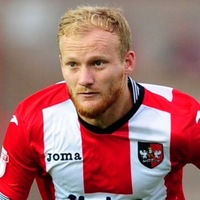 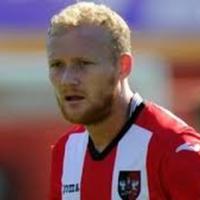 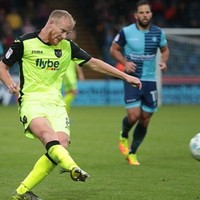