Watkins the hero as his double wins the derby

After an uneventful first half Jamille Matt had opened the scoring for the visitors. But it was academy graduate Watkins who had the final say, scoring two magnificent goals late-on in front of the Big Bank.

There were two changes to the City side for the eighty-third Devon derby between these two sides. Matt Oakley returned from injury to anchor the Grecians’ midfield in a 4-3-3 formation, and David Wheeler was handed a starting berth on the right flank. Jamie McAllister resumed duties at right-back with club captain Jordan Moore-Taylor still out with the illness that forced him to miss the Crawley match on Easter Monday. For the visitors, Derek Adams named an unchanged starting eleven from the side that lined up against York City on Easter Monday, meaning that Reuben Reid and Jamille Matt were partnered at the spearhead of the Argyle attack having both found the net at Home Park five days ago. Midfielder Hiram Boateng, who rejoined Plymouth on loan from Crystal Palace last month, had to make do with a place on the bench.

In front of a bumper crowd at St James Park, the opening ten minutes were played out mostly in the middle of the park, with both sides well aware of the importance of the occasion. Ryan Harley looked to repeat his Home Park heroics from last November with two minutes gone, but he couldn’t quite latch on to Jayden Stockley’s knock-down as Luke McCormick rushed off his line to gather. It was the visitors who registered the game’s first shot on target in the eleventh minute, though Reid’s strike on the turn was too tame to cause Bobby Olejnik any problems. Shortly after, the Grecians were forced into an early change as stand-in-captain Oakley was replaced by Arron Davies.

Two minutes after Davies’ arrival, Carl McHugh had the ball in the back of the net for the visitors. The Argyle celebrations were short-lived, though, as referee Keith Stroud deemed the 2013 League Cup finalist to have fouled Craig Woodman in the build-up to the goal. In the twenty-eighth minute Peter Hartley was adjudged to have fouled Wheeler on the right-hand side of the Argyle area with City surging forward in good numbers. It was Lee Holmes who stepped up to take the resultant free-kick, but the City winger couldn’t beat the wall from twenty-five yards out.

With thirty-three minutes played the Pilgrims worked the first clear-cut chance of the game after a cagey opening half an hour. After the ball rolled nicely for Matt inside the City area the Jamaican-born striker looked to find the bottom left-corner, but Olejnik got down quickly to deny the loanee striker his third goal in Plymouth colours. Five minutes later the Pilgrims threatened again as former Celtic winger Graham Carey blazed a shot from the edge of the area high, wide and into the Big Bank.

After a minute of stoppage time the referee’s whistle brought to an end an uneventful first half in the Devon sunshine with the scores still tightly deadlocked.

Shooting towards their own supporters, Argyle began the second half brightly. Two minutes after the restart Troy Brown showed a good turn of pace to steal the ball from Reid and prevent the seven-goal striker from going clean through on goal.

Reid’s persistence was rewarded, though, as his physicality was instrumental in his side breaking the deadlock in the fifty-seventh minute. After doing well to hold off both Christian Ribeiro and Craig Woodman, Argyle’s top-scorer for the past two seasons slid the ball into the path of Matt, who drilled past Olejnik and into the bottom-left corner.

The Grecians responded with their brightest spell of the game. Lee Holmes’ cross from the left went begging in the sixty-third minute, before Harley fired a speculative shot well off-target soon after. Paul Tisdale decided to roll the dice a minute later by introducing Jake Taylor, who scored City’s opening goal at the Checkatrade.com stadium before setting up the second, in place of Wheeler on the right-hand side. David Noble was also brought on in the seventy-third minute with McAllister the player to make way.

Olejnik was called into action twice in quick succession as the game entered its final quarter, first denying Reid at the near-post in the seventy-fourth minute, before pouncing on a loose ball in the area three minutes later with Matt bearing down on goal. As the momentum looked to be with Argyle going into the final ten minutes, it was Watkins to the rescue once again. After receiving the ball on the edge of the area, the PFA Fans’ Player of the Month for March worked some space before firing home at the near post in front of the Big Bank. The academy graduate was at it again five minutes later, this time stinging McCormick’s fingertips with a well-struck effort from thirty yards out.

But City and Watkins weren’t to be denied, as with seconds of the game remaining the youngster drove forward, beating three Argyle players in the process, before smashing into the top-corner from long-range. An academy graduate scoring a last-gasp winner against his side’s arch-rivals - it was Roy of the Rovers stuff for a player whose career is only going in one direction. It was truly one of the greatest goals in Devon derby history. There was barely time for Argyle to restart the game after Watkins’ strike, as the referee called time on a memorable afternoon at St James Park. It’s eight unbeaten and two points off the play-offs now for City.

Man of the Match: Ollie Watkins 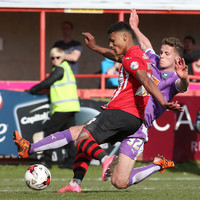 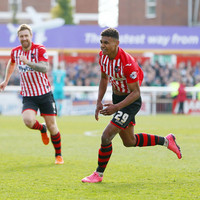 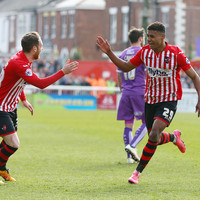 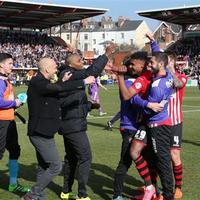