Welcome to St James Park, Home of Exeter City Football Club. We begin the tour at a location that used to be home to St James Church, the second biggest building in Exeter (only Cathedral was bigger).

The Church was originally built in 1836 and re-built 1878-85, only to eventually be destroyed in the blitz in 1942 as part of the Baedekker raids launched by Hitler to destroy beautiful Cathedral cities in UK as retaliation for RAF damage to Lubeck, a beautiful German city.

What wasn't destroyed was the growing popularity of football, or the site that would become SJP.

In the late 19th Century, Exeter was a rugby city but football was growing in popularity amongst the population. At this time a series of teams emerged in Exeter [Exeter Association formed 1890, Exeter United (1896) and St Sidwell’s United (1901). All played at this site at one time or another as it became the premier football ground in the city.

The first known football game at the Park was 6 October 1894 (Exeter Association v Minehead). Minehead complained that the grass was too long!

St Sidwell’s emerged as the top team in Exeter and in 1904 changed their name to Exeter City. So the history of Exeter City actually goes back to 1901 and not 1904 as commonly thought. 1904 was just a name change.

Interestingly both St Sidwell’s and then Exeter City played in green and white! It was considered unlucky and in 1910 the kit was changed to red and white.

Relevant to standing on this particular part of the ground is that the first hero of City fans was a curate at the church – the Rev Edward Reid. He was also our first overseas player having been born in Newfoundland, Canada.

He came to England to go to Oxford University and then signed for Swindon Town. He transferred to Exeter when sent to be a curate here. He was leading goalscorer with 16 goals in our first season as Exeter City (1904/5). 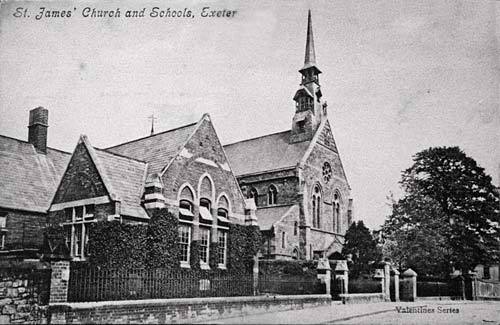