This section of the first floor of the building is home to some of the main hostility areas at St James Park.

Packages for these rooms on match days include your match ticket, meal, programme and teamsheet and half time tea and coffee.

There is a discount if you already have a ticket. You have your own VIP entrance and the chance to see the after match Man of the Match presentation.

You can book the Suite when not being used and it is free to Trust members if over 50 people are attending (normally at least £150) and you want use of the bar.

Volunteers repainted the suite to a more neutral colour to assist with its promotion as a wedding venue.

In the main room there are a number of images around the walls related to the club's history, including the 1963 promotion winning side, and Headley, one of the clubs most colourful and memorable supporters.

The bar area outside of this has several items of interest and large poster of 1914 games in Rio is a reminder of of the amazing story of Club’s tour to South America when Exeter became the first ever team to play Brazil.

In shot, the players, and a selection of directors and their wives went by boat (3 weeks) and played 8 games in Argentina and 3 in Brazil. On return World War 1 broke out and ship fired on!

One highlight is the photo of George Best playing in 1969 FA cup tie at SJP. Alan Banks gave City the lead but star studded United came back to win 3-1.

There are also Steve Flack’s boots worn in 2005 cup ties against Manchester United... So impressive was the tie and the coverage that followed that the Sun newspaper sponsored his footwear.

Something not to miss is the Adam Stansfield shirt. Adam was a hugely popular City striker who died of cancer in August 2010. The club retired his shirt for nine seasons in his memory.

The fans still sing his name at every match! 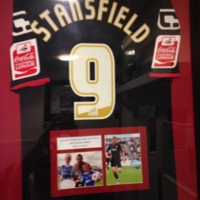 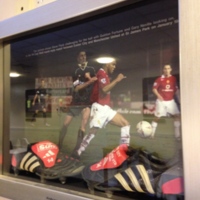