Along the corridor that runs along the back of the main stand you will find the hall of fame. This walkway is home to a number of executive boxes, each named after one of the inaugural entrants to the HOF.

Half way down the corridor is the Directors Suite, where Club Directors entertain their visiting counterparts. Also for each game a Trust member is drawn out of a hat to be Director for the Day.

This spot provides the chance to take a fabulous view of the stadium and tell a bit of the history of its development.

- First structure was a grandstand where current old one is. This was built in 1908 (to mark turning professional and joining the Southern League) but burned down in 1926.

-The current structure dates from then although it was delayed by the General Strike!

-One year before a covered terrace was built opposite this, known as The Cowshed.

- Originally the ground was too short for FA Cup regulations and opponents objected to playing at SJP. As a result a few home FA Cup ties had to be played at the old rugby County Ground.

-Thankfully a land deal was done in 1911 and this allowed the big bank terrace to be built behind the goal.

- In 2000/1 the old big bank was replaced with the current one and the Cowshed replaced by the current main stand.

- The away end has always been an open terrace, although this may be rectified in the near future with the club purchasing a stand from Barnet!

- TV gantry. In addition to Sky and BBC who share footage the Club films the game for video analysis.

There are also more items within the suite itself, including... 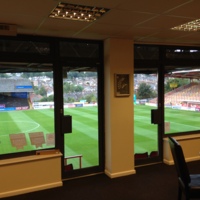 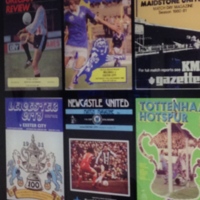 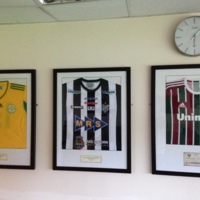