Walking round the ground you will come to what is the largest standing terrace in the football league.

Originally this area was not owned by the Football Club, but in order to have the ground extended to allow FA Cup matches to be played here, local MP Arthur Duke raised the funds in order to purchase the land and build a terrace.

As a result, this stand used to be known as Duke Bank. It has also been the Cliff Bastin Stand and the Thatchers Stand, but to all it is most commonly known as the Big Bank.

Redeveloped at the turn of the century, the original stand made way for the structure we see today. The original bank was less steep and wider, and the old centre spot could be found at the top of the stand.

There also used to be a goal in the area behind the stand where the players used to train. Today the players are out at the Cliff Hill or Cat and Fiddle training ground and the major work done here is by the fans and the ever growing section of support, The Red Legion. 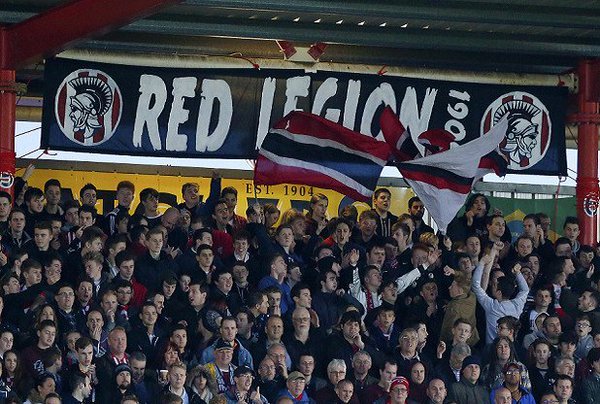