The final location on the tour is this new space to remember City fans and players who have died. The garden area is continually being developed and includes primroses from bank of old cowshed.

Most recent addition is memorial, organised by the Supporters Trust, to 11 players who had played for City who died in World War 1. Includes Evelyn Lintott who was a student at St Luke’s College and played one League game for City. He went on to play for England and was national secretary of the Player’s Union. He was killed on the Somme.

The first team squad paid respects and laid wreath on 11 November 2014, while there was also a memorial service held on the 100 year anniversary of the Somme in 2016.

The area also has Adam Stansfield memorial (high up above plaques), while there are also plaques, purchased by family members, to remember loved ones who had a great love for the club. 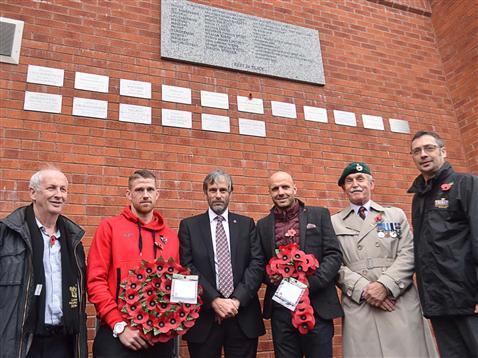