Formerly on the books at Tottenham Hotspur and then Chelsea, making four league appearances for the latter club, Harding joined Exeter City in the summer of 1913.

He only played in one first team game the following season - the first one at home to West Ham United.
Gus was in the team that played Brazil in 1914, as part of the party that toured South America. 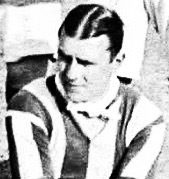