Although born in Halifax, Harford grew up in London, beginning his playing career at Charlton Athletic in 1960 and turning professional in May 1964. He only appeared in three league matches for Charlton.

Signed by Exeter City in January 1966 in a deal that saw him arrive on a free transfer, but if he signed for the Grecians again for the following season (which he did) then City would agree to pay a fee of £750.

Harford made his debut in a 2-5 defeat against Peterborough United at St James’ Park.

He was to miss just one game from then on until the end of the season. He had been recommended to the club by City trainer Jock Basford who was at Charlton when Harford joined them from school.

Harford made the centre-half position his own in 1966-67 and played in 38 league matches, scoring one goal, against Bradford Park Avenue. The following season he added 41 league outings and one goal.

Harford then joined Lincoln City in July 1967 playing 161 league matches and scoring ten goals. In June 1971 he moved to Mansfield Town, but he only stayed for six months during which time he made seven league appearances.

His next move, in December 1971 was to Port Vale for a fee of £5,000. He was a regular for the rest of the season, but in January 1973 he was loaned to Colchester United, who paid Vale £1,750 the next month to secure his services on a permanent basis.

He left Colchester in 1975 to play for Romford, but within twelve months knee problems ended his playing career. He returned to Colchester as youth coach.

Soon after being sacked as manager of Luton, Harford became assistant manager and then manager of Wimbledon in 1990.

He resigned in October 1991, but soon found work at Blackburn Rovers as assistant manager to Kenny Dalglish. he was to take over as manager in 1995, staying at the helm until 1996-97.

He was sacked in September 1998 and replaced by former Grecian Gerry Francis.

Appointed first team coach at Millwall in the summer of 1999, he became caretaker manager in September 2000, before returning to the coaching staff at the club.

In October 2002, Ray Harford was diagnosed with lung cancer and sadly died on the 9th August 2003, he was still coaching at Millwall at the time of his death.

Ray played a total of 392 games for a number of clubs and as manager was in charge for 428 games.
He was said to be one of the top coaches of his generation. 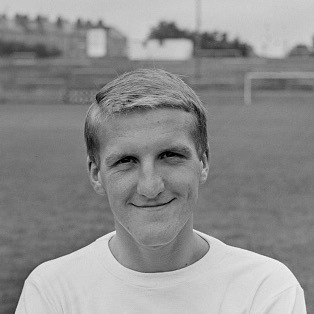