Progressing via the Exeter City youth sides and becoming an apprentice, Harris signed a full contract for the Grecians in August 1986.

His first Football League opportunity came as a substitute when he appeared in a 4-1 defeat at Darlington in December 1987.

He had to wait until the following March for his first full start, that coming against Scarborough at St James’ Park and he celebrated that with a goal in the 1-0 win.

Harris worked as a painter and decorator before becoming a postman for several years, but more recently has returned to painting and decorating again. 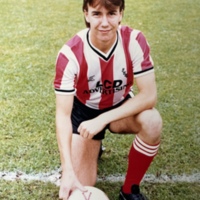 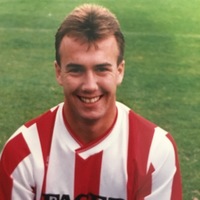 1986/87, Bideford, Exmouth Town, Forwards, James Harris, Jamie Harris, One of our own