The son of former Exeter City player, William Harrower, Steve joined Exeter City in December 1983 from Dawlish Town, giving up his job as a plumber.

He was spotted playing for the Devon County side by then City player-manager Gerry Francis. Harrower went straight into the first team making his debut as a substitute against Bournemouth at Dean Court in a 3-1 defeat.

A versatile player, nicknamed ‘Mouse’, who could fill any one of several positions, Harrower was to remain at St James’ Park for seven years and featured in the Fourth Division championship winning side of 1990.

Unfortunately a persistent back injury limited his appearances throughout 1989 and at one stage he had played just 18 minutes of first team football in nearly ten months.

He linked up with Yeovil Town in October 1990 for a fee of £5,000, being signed by his former Grecians’ team mate, Clive Whitehead, who was player-manager.

By 2005, Harrower was working for the Royal Mail as a Duty manager in Newton Abbot. In 2010 he was living in Combwich near Bridgwater. 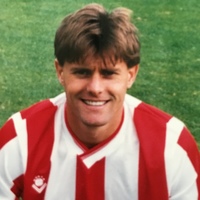 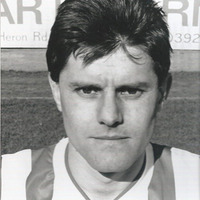 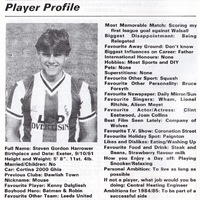