One of a number of players who were signed by Exeter City from South Wales in the mid 1950s, Hill arrived from Pontypridd in June 1955.

Hill had promised to sign for Everton, but after starring in the Pontypridd Boys Club side in a friendly at St James’ Park, City manager Norman Dodgin was so determined to sign the player that he parked his car in front of the visitors team coach and threatened to leave it there until Hill signed!

Mainly a reserve team player whilst at St James’ Park, he eventually made his league debut for the Grecians against Southampton in September 1957, scoring in the 2-2 draw. In and out of the side for the next three seasons, he left Exeter to sign for Salisbury City in the summer of 1960. 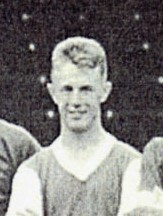