The son of another former City player, Harold Holman, and a talented sportsman in his own right, Harry was one of just two people to play for England at under 15 level in both football and rugby. Choosing to focus on football, Harry jnr. started his professional career as an apprentice with Chelsea, moving back to his hometown to sign for the Grecians in July 1976.

The England Schools international made his Grecians debut in a goalless draw against Workington at St James’ Park in October 1976, and continued to play in the following six league games as Exeter went on to win promotion. He won a regular place in the City side throughout 1977-78 playing in 37 league games, scoring eight goals, the first of which came in a 4-1 home win over Port Vale.

The following season he was restricted to just 8 league appearances and one goal, having suffered a very bad knee injury in a match away to Southend. An injury which cost him a potential move to Wolverhampton Wonderers. Transfer listed at his own request in August 1978, four months later, Harry signed for Peterborough United, a month after he had a reported dispute with manager Bobby Saxton over his lack of first team opportunities. He only stayed at Peterborough until the end of the season, scoring one goal in nine league starts.

Moving back to the Exeter area to live, apart from a handful of games for Exmouth Town, Harry then retired from the game. He was still living in Exeter in 2010.

In November 2020, Harry died of a a heart attack. Harry was a great friend of Julian Tagg, Exeter City president and director of external affairs.

Julian said: "Harry was a very talented player who came through our youth team and many people will remember him as a young player at St James Park. He was a very good friend to me; I was best man at his wedding, and we had a long, enduring friendship which I valued tremendously.

"He was an excellent player and he will be hugely missed by so many people for his likeable and effervescent personality. Our thoughts are with Harry’s family at this very sad time." 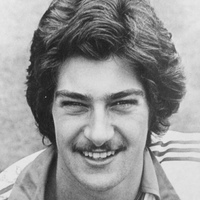 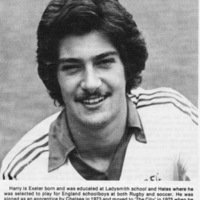 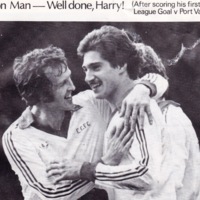 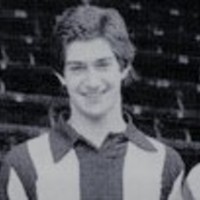 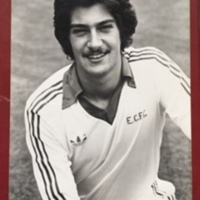 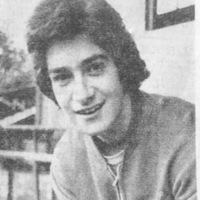 Yes Harry played for a few years at city .a key part of the promotion side of the late 70s. He was at Plymouth before city as he was at Chelsea as an apprentice at the same time as butch Wilkins and others who became very famous .he came home as he was unhappy there  or for another undisclosed reason . He was certainly one of the brightest footballing prospects around in his day . He excelled at all team sports . His father was called Harry not Harold that was an uncles name .

Harry senior was a very good sportsman himself but unfortunately the small matter of the Second World War put paid to any chances of a career as he  served from start to finish in the eighth army of desert rat fame.

He was and still is a good mate of Julian tagg ( hi ju ), as they grew up as neighbours and friends .

He did indeed curtail a football career through injury which to this day is a great shame .

Im trying to track down Harry with a view to get his autograph.I'm a  Chelsea autograph hunter  currently having over 1400 chelsea autographs.Would love to add Harrys to my collection.any help would be great-Wayne Pope

David, Thanks for the photos, we have used them on our archive, and updated Harry Juniors, too.