Described as being of ‘strapping physique’ on signing for Exeter City in the summer of 1929, Gurkin was a man of many clubs.

Signing for West Ham United in 1921, he made one league appearance for the Hammers, before moving to Norwich City for the 1922-23 season, adding a further ten league outings.

After leaving Norwich, Gurkin played for Stalybridge Celtic and then Spennymoor United. In 1924 he signed for Third Division North side, Durham City, where he enjoyed the best spell of his career, scoring three goals in 161 appearances.

After another short stay with Stalybridge Celtic, Gurkin signed for the Grecians.

He made just two league appearances against Queen’s Park Rangers and Torquay United respectively, being released at the end of the 1929-30 season.

Gurkin then played for Hyde United, Jarrow and Murton. He died in 1976. 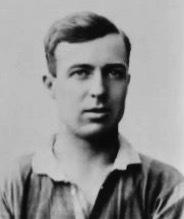