United at the Park

As youngsters we are all very impressionable, so it was perhaps no surprise that in my early years I had a soft spot for Chelsea FC, after of course, Exeter City. Now, I'm older, hopefully wiser and a lot more cynical, Chelsea do not mean a great deal to me.

My early fondness for Chelsea came after I attended my first ever First Division fixture in 1961, between Chelsea and Blackburn Rovers. The Blues won, I was impressed, and from then on for a few years I took an interest in their results.

Yet, only a couple of months before that visit to Stamford Bridge, I had watched a First Division team play for the first time - this being Manchester United at St. James' Park. They were visiting for a first round tie in the inaugural season of the Football League Cup.

Having only attended my first match at the Park the previous season, the thought of being able to see a team as well known as Manchester United play my beloved Exeter City created huge excitement for this particular nine-year-hold, who counted down the days to the actual match once the draw had been made.

Funnily enough, that same feeling of excitement had surfaced once again, forty-five years later, as we all anticipate a trip to Old Trafford in the third round of the FA Cup!

Back in October 1960, on the day of United's visit to Grecians, I had simply not been used to 'big' crowds at the Park, and my first experience of being in one led to me having to sit on the wall at the back of the St. James' Road terrace, in order to get a clear and excellent view of the pitch.

Somehow I think if anyone did that now, one of City's stewards would quickly be dispatched to ask that person to get off the wall, or face the consequences of being swiftly ejected!! Manchester United were of course still in the midst of rebuilding their team after the tragic events of Munich in 1958, but nevertheless, there were many household names in the side such as young Nobby Stiles and the return of former Grecian, Maurice Setters, who I had heard much about, but never seen play.

Setters was a Honinton lad who made the big time. He had only played a handful of matches for Exeter City before being transferred to West Bromwich Albion for £3,000 in January in 1955. Five years later Manchester United parted with a fee of £30,000 for his services.

Stiles was to return to St. James' Park nine years later as Manchester United met the city in the FA Cup third round, winning 3-1. More of that game another time though.

Although it seemed to be a very big crowd for a young lad such as me at the time, surprisingly it was not a full house for the tie, with an attendance of 16,494, but even so, this had been the biggest crowd I had been part of. That record was soon 'broken' with the previously mentioned visit to Stamford Bridge, and not long afterwards I was in an even higher attendance at White Hart Lane as Tottenham Hotspur took on .... Manchester United.

With much publicity surrounding our third round FA Cup visit to Old Trafford relating to just how much the Grecians can expect to bank - figures of £500,000 upwards have been quoted - back in October 1960, the League Cup tie against United produced receipts of just over £2,993!! They will take more than that in the sale of pies next month!!

I honestly cannot recall too much of the game itself, apart from it being the biggest occasion of my fledgling football supporting life. Sadly, I soon realised that such matches were to be few and far between when you follow Exeter City. When we do get the opportunity to play in such matches, you savour every moment - it could be a long wait until the next one.

City were not the greatest team in the world, as their Fourth Division position suggested, but nonetheless, you always hoped that and upset of some sort would be possible. Player-manager Glen Wilson and his players had a huge task in front of them though.

The Grecians 'lifted' their game for the tie against United, a fact reported by the Express and Echo: 'A City side that came out fighting from the start and turned on a soccer display that amazed everyone in the Exeter City ground'. It certainly was amazing as City took the lead against their First Division opponents when Graham Rees netted after 15 netted. Rees had a 'goal' disallowed three minutes earlier for a foul on United keeper Harry Gregg, and he had the ball in the net once more five minutes into the second half, only for that effort being rules out as well, for offside.

As City tired and United took control, the inevitable equaliser cam with just thirteen minutes remaining - thirteen minutes from an almighty upset. Shay Brennan's free-kick was deflected into the path of Mark Pearson and he fired in from 18-yards to crush the Grecians' hopes.

City had, however, earned the right to a replay at Old Trafford, but this time the task proved to be too much, despite another gallant effort, as they lost 4-1. Surprisingly, the crowd for the replay was lower than the one at St. James' Park! Can you imagine that happening in 2005?! Only 15, 662 fans were present to see United win.

Sadly, I was simply too young to make the journey to Old Trafford for the replay - after all, there was a matter of school the next morning which I remember thinking was a complete pain. It was to be many years later that I eventually made a trip to United's ground, and have been back on a couple of occasions since.

Co-incidentally, living where I do now, and travelling around the North West non-league scene, I have already once this season got off at Old Trafford tram station, not to see United, but to take a two mile walk to a North West Counties League sides' ground. Little did I know a few weeks ago, that this tram service would be taken over by City fans for a short while on a certain day in January in 2005!!

Back to the Football League Cup first round replay though at Old Trafford. Exeter's lone goal came from a Jimmy Thompson penalty in the 13th minute, whilst Albert Quixall (2), John Giles and Pearson were on target for the hosts.

As I got older and taller, the wall at the St James' Road end was never used by me again (just that once), but it certainly proved to be very useful on that great night in October 1960. 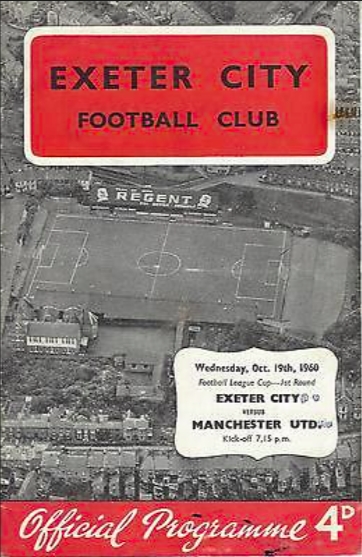