Two goals from Jon Stead sent Exeter City to a 2-0 defeat at home to Notts County.

City made one change to the side that started the win over Stevenage on Tuesday night, with Jordan Moore-Taylor serving a one-match ban for the red card he picked up in that game.

Lee Holmes, who scored as a second-half substitute in that game, was promoted to the starting line-up. Notts County named former Grecian Richard Duffy in their starting XI.

It was County’s top scorer Stead who put the visitors in front after three minutes. Alex Rodman took advantage of a slip from Luke Croll to race into the area and square a pass for the former Blackburn Rovers’ striker to side-foot the ball into an empty net.

It was not the start the Grecians were after, but they came close to equalizing midway through the half when a through ball from Lloyd James found Jack Stacey running in on goal but County keeper Adam Collin, who had an impressive game, raced off his goal line to block superbly.

Simpson also sliced an effort wide of goal before County went 2-0 up. Again it was Stead who was the scorer. He got his ninth goal of the season as he profited from a Michael O’Connor cross into the box to fire home from six-yards.

City started the second half on the front foot with Lee Holmes trying his luck from distance, forcing a save out of Collin at his near post and then Jake Taylor hitting an effort just off target.

Past the hour mark, Robbie Simpson flicked a ball into the path of Reid who tested Collin with another low shot down towards his near post. Simpson was next to go close as his shot from 25 yards out was deflected behind for a corner.

Manager Paul Tisdale then turned to his bench to try and change things, bringing on Ethan Ampadu and David Wheeler for Luke Croll and Jack Stacey and switching to a 3-5-2 formation.

Reid went close with another effort. Then Jake Taylor put in a superb cross from the right that was nodded back into the danger area by Reid but nobody could get a telling touch to the ball in the six-yard box.

Simpson then forced a good save out of Collin once more before he was replaced in the 84th minute by Liam McAlinden.

County then created their first meaningful chance of the second half as O’Connor forced Bobby Olejnik into a smart save with a shot from an acute angle.

However, in truth, the visitors were content to just sit in, slow the game down and frustrate City.

The Grecians had a couple more chances in stoppage time.

The first came as McAlinden won a free-kick on the edge of the box which Reid fired powerfully towards the top corner, but Collin thwarted City again with his best save of the match.

Then McAlinden glanced a header towards the bottom corner but again Collin was equal to it. 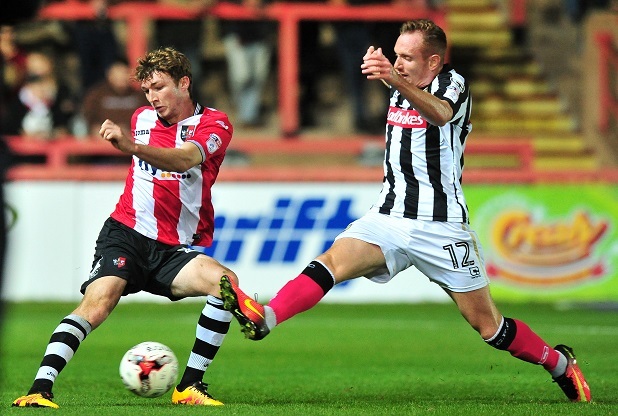