An 84th-minute goal from Adebayo Akinfenwa sent Exeter City to a cruel defeat at Adams Park against Wycombe Wanderers.

The Grecians had defended resolutely for the majority of the match, but a looping ball into their box found the former Wimbledon front man and he controlled the ball before hitting a deflected shot into the back of the net.

City manager Paul Tisdale made one change to the starting line-up from Tuesday night’s defeat to Notts County, with Jordan Moore-Taylor coming back into the team having served a one-match suspension. He replaced Pierce Sweeney at the centre of the Grecians defence.

Wycombe were unchanged from the side that won 5-1 against Crewe Alexandra last time out.

The home side started the match strongly and forced a number of corners in the opening 20 minutes and also posed a threat from some long throws into the box from Joe Jacobson.

However, City, lining up in a 4-5-1 formation, got men behind the ball and frustrated their opponents in the first half with some disciplined and resolute defending.

Wycombe’s best chance of the half came from a corner in the 18th minute as Jacobson swung the ball towards the back of the box where Anthony Stewart headed the ball back into the danger area for Paul Hayes to nod over the crossbar from six yards.

City grew into the game in attacking sense as the half wore on, with Reuben Reid first to test Jamal Blackman with a long-range effort and Ollie Watkins having a looping header cleared off the line by Danny Rowe.

The Grecians could also count themselves unlucky with a three decisions from the officials.

Firstly, Reid was denied a penalty when he appeared to have his shirt tugged by Michael Harriman and then, when he was played through on goal by Ollie Watkins, Reid was caught by a dubious offside flag.

Watkins was then himself stopped from having a shot on goal when he got past Harriman and the Wycombe player tripped up over his own feet but got a sympathetic decision from referee Nicholas Kinsley.

Wycombe had the first real chance of the second half just past the hour mark as Sam Wood’s cross deflected towards goal and forced Olejnik into a good one-handed save.

Moments late Luke Croll was in the right place to get a telling clearance on a Garry Thompson flick on as Hayes was lurking.

That was Hayes last bit of action in the game as he was replaced by Adebayo Akinfenwa, who a minute after coming on headed a Wood cross a foot wide of the post.

Wycombe then began to build the pressure with Dominic Gape playing a dangerous side-foot ball right across the face of the goal.

However, City were still a danger and Harriman had to put in a superb sliding challenge to stop Lee Holmes getting on the end of a Watkins cross for what would have been an easy finish.

Then just as City looked as though they were going to see out the game and get a clean sheet Akinfenwa opened the scoring with six minutes to go. It came from a long ball into the box that he cushioned on his chest before turning and hitting a shot that deflected on its way past Olejnik into the back of the net. 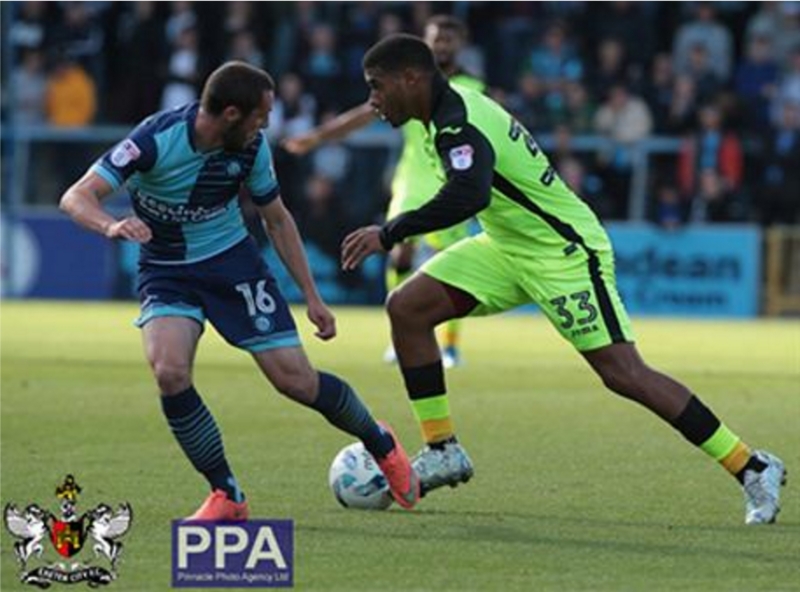