Exeter City picked up a deserved point in their match with Grimsby Town as a focused and determined defensive performance saw the match end goalless.

In truth, the Grecians were unfortunate not to come away from the match with all three points as they dominated proceedings but were just unable to find the back of the net despite some very good chances. City had two efforts cleared off the line and hit the crossbar with an effort from Reuben Reid.

However, the clean sheet will give the defence, which is still missing two first-choice centre-halves, loads of confidence as goalkeeper Christy Pym only had one save to make.

City made two changes to the starting line-up from the side that lost to Wycombe Wanderers last time out.

Bobby Olejnik, who picked up an injury in training dropped to the bench, and was replaced by Pym while David Wheeler came in for his first start of the campaign at the expense of Ollie Watkins.

Omar Bogle had the first chance of the match as he warmed the gloves of Pym with a header in the opening minute. However, for the rest of the first half, the 21-year-old remained untroubled.

The Grecians, as they had done for the majority of match away at Wycombe last weekend, defended resolutely with Luke Croll looking particularly impressive on the ball in the opening 45 minutes.

James McKoewn was definitely the busier of the two shot-stoppers as he palmed away a good shot from Lee Holmes after eight minutes and then tipped a header from Reuben Reid over the bar following a good cross from David Wheeler.

Ben Davies also had to clear a Croll header off the line and both Lloyd James and Robbie Simpson hit half-volleys over in a first half that belonged to Paul Tisdale’s side.

Holmes went close for City at the start of the second half as he sliced his effort off target from 20 yards.

Danny Andrew then gifted a great chance to City as his header back McKeown fell short and that allowed Reid to steal in and lift a shot over the Grimsby keeper. Unfortunately, his effort cannoned back off the bar.

Then a great sliding challenge from Lloyd James created a chance for Wheeler but his shot went over.

Reid then went agonizingly close to making it 1-0 as Pierce Sweeney’s long-range shot deflected into his path before Lloyd James tested with McKoewn and Danny Collins had to put in a last-ditch sliding challenge to prevent Simpson from scoring.

Luke Summerfield then had Grimsby first chance of the second half, but his volley was comfortably over Pym’s crossbar.

Tisdale then turned to his bench to try and changing things sending Watkins on to the pitch for Reid.

As the game entered the final 10 minutes Simpson set up a good shooting chance for Wheeler. However, his effort was blocked by another good sliding challenge and, from the resulting corner, Grimsby cleared an effort off the line from Simpson, again.

Grimsby then went close to breaking the deadlock as Summerfield flashed a shot just wide of the post. But a goal for Grimsby at that point would have been very harsh on the Grecians who continued to push forward in the closing stages. However, they were unable to break the deadlock and had to settle for a point. 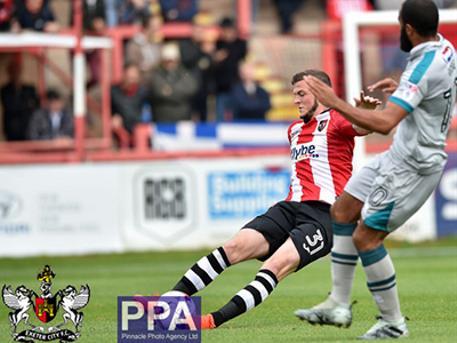