Exeter City recorded their fifth away league victory in seven matches with fantastic first half of attacking football at Morecambe.

The Grecians, who moved up to 19th in the table on the back of the victory, raced into 3-0 half-time lead and then put in a stubborn defensive showing after the break to stop Morecambe finding the back of the net for the third home game running.

City manager Paul Tisdale made four changes to the side that lost to Cambridge United last time out.

Reuben Reid returned from injury and Jake Taylor, having served his one-match suspension, took his spot back in midfield.

They were joined in the starting XI by Joel Grant and Lloyd James who had both performed well as second-half substitutes against the U’s.

The four returning players – plus David Wheeler and Lee Holmes – made a massive difference as City put in a superb attacking performance to lead 3-0 at half-time.

Reid’s first telling contribution was to hold up the ball on halfway and pass to Holmes.

That created the opening goal as Holmes raced to the edge of the box before sliding a pass into Wheeler who hit a first-time shot past Barry Roche.

Reid then produced more good hold up play in the area when Jake Taylor fizzed a pass into him. That gave Grant a sight of the Morecambe net and the Jamaican international hit the ball in off the inside of the post for his second goal in as many games.

Christy Pym had to be alert at the other end on the 20-minute mark though as Morecambe floated a corner to the edge of the area where Tom Barkhuizen hit a volley through a crowd of players and into the young keeper’s arms.

Another lapse in concentration, then allowed Kevin Ellison in on the left side of the box – and although as offside flag went up – Pym raced off his line to block the veteran striker from getting an effort on target. However, the City keeper received a nasty cut above his knee for his troubles and hobbled off injured to be replaced by Bobby Olejnik.

Morecambe then started to fly into a few challenges with Alex Whitmore caught David Wheeler with a high and late tackle 30 yards from goal.

He was booked for the challenge but not before Holmes had picked up the loose ball raced into the area and put City 3-0 up with a wonderful outside-of-the-boot finish.

Morecambe came out with more intent in the second half with Lee Molyneux winning the ball off Luke Croll and hitting a fiercely-struck effort that Jordan Moore-Taylor did well to block.

A free-kick then gave Jim Bentley’s side another chance to launch the ball into the box and Carl Stockton did well to turn his marker on the edge of the six-yard area but then blazed the ball over the crossbar.

A long cross-field pass then sent Barkhuizen clear put as he brought the ball down Olejnik was in the right place to intercept.

However, it was not until the 74th minute that Morecambe managed to force Olejnik into another good save – the time the former Peterborough United shot-stopper diving across his goal to palm a Molyneux free-kick around his post.

Pierce Sweeney then came to City’s rescue a minute later as he cleared Peter Murphy’s shot off the goal line. 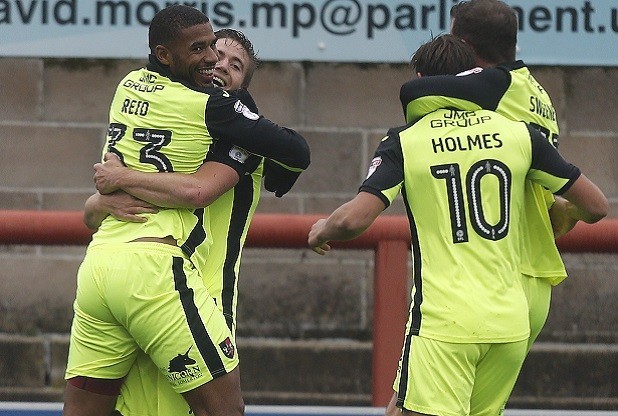