Exeter City kept their hopes of qualifying from their EFL Trophy group alive as they beat Chelsea 3-2 at St James Park.

Goals from Ollie Watkins, David Wheeler and Liam McAlinden put the Grecians into a comfortable position, but two goals from Ike Ugbo, coupled with injuries to Matt Oakley and Jordan Moore-Taylor, set up a nervy finish for the home side.

However, the three points now mean if City can beat Swindon Town at home in their final match of the group stage on November 8 they will qualify for the knockout stages.

City manager Paul Tisdale made four changes from the side that had comfortably beaten Barnet last time out. In came Matt Oakley, Joel Grant, Ethan Ampadu and McAlinden.

Against a Chelsea side who were keen to play the ball out of defence and through their holding midfield duo of Ruben Sammut and Trevoh Chalobah, City played a high-pressing game with Wheeler, Reuben Reid, McAlinden, Joel Grant and Ollie Watkins all pushing forward and shutting down the space and time the Blues had on the ball.

That tactic helped City get off to a dream start as Grant stole possession in an attacking area, inside the first minute, and played McAlinden in on the right side of the box. The former Wolves striker then stood an inviting cross up to the back post where Watkins headed the ball back across goal and into the net.

A long ball over the top then sent Reid racing clear five minutes later. He beat Chelsea keeper Bradley Collins to the ball and then tried to curl an effort around the keeper into the net, but Fankaty Dabo was there to head clear.

Sixteen-year-old Ethan Ampadu – City’s own rising star – then had to be alert at the other end as a flowing counter-attacking move from the visitors ended with a shot from Charlie Wakefield that he booted off the line.

Christy Pym then showed his reflexes were just as sharp as he claimed a dangerous Dujon Sterling cross just as Ugbo looked as though he was going to head home.

David Wheeler, who was winning lots of the long balls played up to him on the right, then showed what he could do with the ball at his feet as he played a neat one-two with Reid before rifling a shot past Bradley Collins from 20 yards out.

Reid then almost ended up with a first half goal himself as he turned his marker on the edge of the area, but he dragged his shot across the face of goal.

City made it 3-0 four minutes into the second as Grant knocked the ball out wide to Pierce Sweeney and he delivered a low cross that was tapped home by McAlinden at the back post.

The visitors were still a threat though and Pym had to race off his line to block a Jacob Maddox shot.

The Grecians made two changes midway through the second half with Jake Taylor coming off for Wheeler and Moore-Taylor limping off injured to be replaced by Connor Riley-Lowe.

Chelsea pulled a goal back on 70-minute mark as the ball fell kindly to Ike Ugbo 30 yards from goal and the 18-year-old forward fired a shot into the top corner.

Lifted by that goal Chelsea pushed forward and won a free-kick on the edge of the Grecians box that Jay DaSilva swung into the area. Thankfully though Luke Croll was there to clear the ball out of the six-yard box.

Reid could have made the last 10 minutes slightly more comfortable for City when Watkins crossed to him the box but he headed wide of the left-hand post.

City then had to see out the remaining five minutes of the match with 10 men as Matt Oakley went off injured after City had made all three of their substitutions.

Ugbo struck the post with three minutes remaining to fire another warning shot and then in injury time he found the bottom corner to make it 3-2.

And Chelsea had one more chance to grab an equaliser as Jay DaSilva curled a shot towards the top corner but Pym made a top-class save to deny the Blues winger and then claimed the corner as the referee blew the full-time whistle. 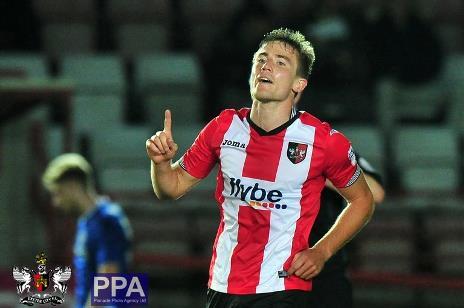