EXETER CITY FOOTBALL CLUB
The following article, printed in the "Football Express" dated August 29th, 1908, is reproduced:
ASSOCIATION: NEW ERA OPENS FOR EXETER.
CITY TEAM'S PROSPECTS: FORMIDABLE FIRST HURDLES.
by "Rover".
"In ringing down the curtain last season I wrote: "It is my sincere trust that when I next address my readers in the columns of the "Football Express" it will be to discuss the prospects of Exeter City in its first season of the Southern League. In the past I have been told that I have often exaggerated the possi bilities of the Association code in East Devon, and coloured its progress, but I am content to let time prove whether such has really been the case."
The trust I then expressed has been realised. To-day, Exeter City takes its place as a centre of First Class Football, and the whole status of the game in this part of the West of England has been changed. We stand now, in importance, level with our Western rivals, Plymouth Argyle and Bristol Rovers, transformation has taken place so rapidly, its initiation and realisation were all a matter of three months - that and the one can hardly yet realise the vast influence and alterations which the change will carry with it.
I do not intend to go over old ground and discuss all the exciting events of the past close season and their all-important bearing on Exeter's welfare. You have heard these events already discussed, and Exeter has certainly had its due share of notice from all manner of writers up and down the country. In a way, the past is done with, and even a recital of the important happenings that led to Exeter being elected to the Southern League "at the top of the poll" at the memorable London meeting in May, is not what readers will be looking for at this momentous stage of Exeter City's history. A discussion upon the season's prospects will be read with more interest, and it is the future of Exeter City, therefore, rather than the immediate past (eventful as that has been) which shall form the chief subject of these, the first notes of another season."

Squad Photo from the 1908/09 season, in which Exeter joined the Southern League and went straight into Division One, finishing 6th. 
Exeter also made it to the Second Round of the FA Cup where they lost away to Plymouth, 2-0. 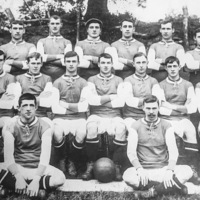 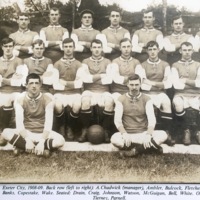 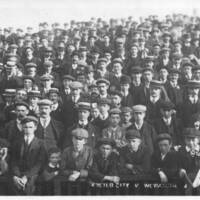 I have a postcard of a team for this season and a photo of Tommy White who was my great grandfather.