WESTERN TIMES 18 JULY 1904
“A meeting of the East Devon Football Association was held on Friday in Exeter, when many matters were arranged in anticipation of the coming season.
St Lukes College were the winners of the cup and medals in the Senior League. Ellacombe (Torquay) won the cup and medals in that division, and on Saturday the 23rd inst: Friernhay club is to be presented with the cup and medals of the Exeter Junior League.
It is anticipated that several new clubs will be affiliated to the Association this year from Exeter and other parts of the County under this jurisdiction.
An effort is being made to form a strong Association Football club at Newton Abbot, and keen footballers are interesting themselves in the formation of a League for the Barnstaple district.
Friernhay and Belmont Club are moved up to the Senior League. If a sufficient number of Junior clubs affiliate it is probable that a third League would at once be formed. This should induce some of the schools of the city
The matches in the cup competitions are to be held upon the fourth saturdays in the first four months of next year.
An examination of referees will be held shortly in Exeter and at other centres such as Torquay and Barnstaple, as occasion demands. Persons wishing to qualify should send their names to the Hon Secretary of the East Devon Football Association Mr W P Wilkinson, Exeter.”


Squad photograph from 1904/05, the first season where the club where know as Exeter City.


The Exeter City Association Football Club, which opens its season on Saturday with a practice, has a very hopeful outlook. A heavy fixture list has been arranged.
The senior XI. are entered in the League and Cup competitions, and, in addition to the League fixtures, friendly games have been arranged with the Batteries at Topsham Barracks, with Green Waves, Cardiff Triumph (winners of the junior cup), and other Clubs in the Plymouth District.
The Club is endeavouring to arrange Channel Island tour.
The team promises to be a strong one. Unfortunately they have lost Winter, their last year's outside left, but among the new players is Horner, who will be remembered in connexion with the old Exeter United XI.
Other players have been secured who have yet to make their reputation  in the West, but, everything considered. the Club's prospects have never been brighter.
St. James's Park will again be the home of the first XI,  whose first regular fixture will take place there on September 10.


Friendlies and other games

The Annual General Meeting of Exeter City was held in May.

The Annual General Meeting of the Exeter City Association Footall Club was held last night at the Red Lion Inn in Sidwell Street.

Mr W. Fenwick occupied the chair and said the question to decide was whether the club should enter for the Devon Senior League as there was no doubt that if they did it would strengthen the club's position in Exeter and would bring a better class of football into the City.

Mr Phillips raised the point that whether the clubs would play on the ground in the state in which it was at the present.
Mr C Fay moved that the club enter the Devon Senior League. He had calculated that the travelling expenses would be about £35. The lesses of the field would do their utmost to make the ground fit.
Mr Parsons seconded and the vote was carried unanimously. A proposition by Messrs W. Morgan and A. Davidson that the colours be altered to Green shirts with white facings was carried.

Skipper Morgan was again re-elected to the position of captain which he has held since the inauguration of the team. Mr S. Horner was re-elected as sub-captain and Mr C H Thomas as Secretary. Mr H. Bolley was elected as sub-Secretary it being thought that as the club was running three teams it was advisable that an extra man be appointed. Mr Fey was re-elected Hon. Treasurer and thanked for his valuable services during the past season. Sir Edgar Vincent was elected Chairman.

Mr C Thomas in presenting the report said that the gate receipts had amounted to £86 1s 5d and there was a balance in hand of £32 (s 3d. The club in all had played 35 matches. Won 28, Drawn 3 and lost 4. Goals scored numbr 118 against their opponents 42.
In the East Devon League of which they were champions 14 matches played. Eleven were won, two drawn and one lost.

The following is a report of the club’s Annual Dinner.

The annual dinner of the Exeter City Association Football Club was held at the Red Lion Hotel, Sidwell-street, last evening, and was a distinct success , The Vicar of St. James the Rey. Phillip Williams presided over a goodly attendance of the supporters of the Club, and justice was done the splendid dinner provided by Mr. Tom Oliver.

After the removal of the cloth the loyal toasts were duly honoured, and M C. Fey then submitted The East Devon Football Association." In doing so Mr. Fey said they had a lot to thank the Association for during the past season, and the Ciub would not have been in the position they were had it not been for the Association, Judging from the numer of players athletes to the Association-nearly 1,000-a great deal of work must of necessity devolve upon the Committee of the Association.

Mr. W. P. Wilkinson, hon. secretary of the East Devon Association, in replying, said the Association were anxious to do all they could to help the all the clubs  afiliated to them, and they also had to keep in touch with the Devon County Association. He had always taken the greatest Interest in all kinds of outdoor sports, and he considered association football was one of the best. He congratulated the Club upon the success of last season, and he hoped that next year they would keep up the reputation they had so well earned

In submitting The Exeter City Association Football Club, Mr. Fone paid a high compliment to the form shown by the members of the team during the past season, and said that if they reproduced the same form next season they would make a bold bid for the chief honours of the Devon Senior Association

The most interesting event of the evening then came on, namely, the presentation of the East Devon Cup and medals to members of the victorious team. The Chairman made the presentation in a neat speech, and handed  the cup  to Skipper Morgan on behalf of the Olub.

The following were the recipients of the medals: The Rev. Reid, Messrs, Peters, Fenwick, Horner. Wallage, Davidson, Sellick, Morgan, Thomas Andrews and Russell.

Other toasts followed, and the remainder of the evening was devoted to harmony, Mr. H. Miller being an able accompanist. 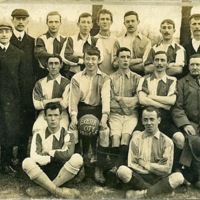 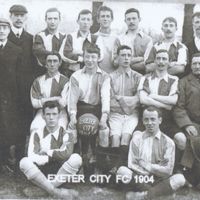 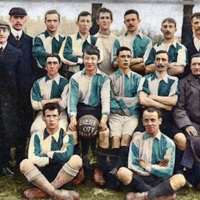 Wish I knew the others!