Having lost our Football League young player of the year, Ollie Watkins, in the summer to Brentford, as well as the emerging talent of the clubs youngest ever player, Ethan Ampadu, to Chelsea, the events of August 31 2017 gave hope to all Grecians that the momentum carried over from the previous season might well continue.

The deadline day activity coming from the club came to life at 9am sharp with the announcement that West Bromwich Albion youngster, Kane Wilson, had signed on loan until January.

At the time Wilson was away on international duty with England's U18 squad, but those with keen eyes on the Premier League/too much time on their hands would have noted that just days before our new loanee had been on the bench for the Baggies league fixture against Stoke.

Described by West Brom manager, Tony Pulis, as 'a good athlete, with good strength and composure' the early signs were positive that Wilson could provide cover and even competition for Pierce Sweeney on the right hand side of defence.

Then after a bright start to the day, the clubs top scorer and (almost) Wembley hero, David Wheeler, departed for Championship side Queens Park Rangers.

The move represented another success for player development at SJP, and while few City fans begrudged the forward in following Ampadu and Watkins to a higher level, it was still sad to see the player who had scored a record breaking 8 goals in 7 consecutive games, earlier in the year, depart St James Park.

Ultimately it was not a huge shock to see Wheeler on his way, given his performances the previous season, and once lunchtime was out the way, and we'd all had time to digest the news, City fans had a chance to welcome the days second loan signing from the Hawthorns, forward, Kyle Edwards.

Another highly rated player from the WBA academy, Edwards was announced as a player who is quick and very direct and has tight ball control, with the ability to go past people and create things... Ollie Watkins anyone?

With the Baggies starlets on board then came the biggest announcement of the day, when former City forward Jayden Stockley's return from Aberdeen was finally revealed to the fans.

Having been spotted in City kit in several locations across Exeter during the week leading up to the deadline, this wasn't an entirely unexpected signing, but the fact that the deal had seen the club set a new record for a transfer fee paid was a welcome surprise to the fan base.

Having scored 10 times in 21 games before his move north of the border, Stockley had been a (literal) big favourite with the fans, who were already looking forward to how the headed goal specialist would fit into the side with in-form striker Rueben Reid.

Then, when it all looked like it was done for the day, Hiram Boateng arrived on a free transfer from Premier League Crystal Palace to send the message boards into overdrive.

Now we wouldn't normally take a look at Plymouth forums, but as our new midfielder had previously had spells at Home Park it seemed to make sense to have a gander.

Happily a lot of the noise coming out from the green fume was that we had picked up a player with real talent, whilst also leaving some Pilgrims to wonder if they should have got the Palace man instead of our former player, Joel Grant.

Never the less, Boateng was a Grecian, thanks in large to the persuasive power of manager Paul Tisdale, as well as former team mates Dean Moxey, Luke Croll and Reuben Reid putting in a good word about the club.

Describing his style as a midfielder who gives his all and leaves it all out on the pitch, it left us discussing whether our fourth and final signing of the day could be the box to box player many fans had been hoping for.

All in all it had been the most memorable deadline day in the clubs history, and while only time would tell if the signings would pay off, it certainly felt like the club was on its way again. 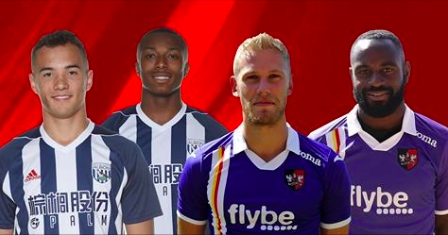