Harold Johnson was born in Radcliffe, Lancashire in 1910.

Johnson played football for Heywood St James' and for Great Harwood. He then moved onto Winsford United and Stalybridge Celtic finally signing for Oldham Athletic in the 2nd Division.

He made his league debut in the 1931/32 season and over the next two seasons took his totals to 13 goals from 37 league appearances. After Oldham were relegated in 1934, Johnson was one of eleven players given a free transfer.

He joined Southend United and in his first season was the club's top scorer with 22 goals in all competitions. He eventually made 36 league apperances scoring 15 league goals

In 1936, he moved on to Exeter City for whom he played in 11 league matches scoring 1 goal.

Scunthorpe and Lindsay signed Johnson in 1937. According to the Lincolnshire Echo, "he can play in any inside forward position, but is at his best at centre-forward".

He scored profusely, finishing the season second in the Midland League's scorers table with 38 goals.

Despite interest from Football League clubs, he re-signed for Scunthorpe for another season. By February 1939, he had overtaken Ernie Simms' club record of 57 goals scored in all competitions during a single season, and seemed sure to break his club record of 52 Midland League goals as well, as Scunthorpe headed for their second league title. Unfortunately for him, he sustained a knee injury in mid-March that kept him out for several matches, and had to settle for 49.

He remained with Scunthorpe into wartime football, but his leg again gave way, and in October 1939 he had an operation to remove the knee cartilage. Once fit again, he also played as a guest for Doncaster Rovers.

Harold died in Scunthorpe in 1981. 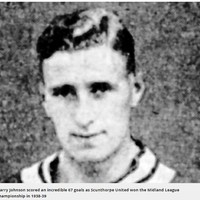 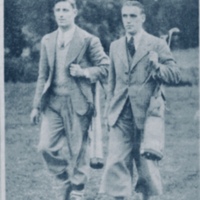