Aaron Martin began his career with Eastleigh, and went on to make 41 appearances for the Conference South side. Played primarily as a centre-back, Aaron was also able to chip in at the other end scoring four times for the club. In 2009 he was signed by Southampton, who at the time were playing in League One alongside ECFC. Initially he went out on loan to Salisbury in the Conference Premier, making 15 appearances and scoring one goal. His performances helped Salisbury to what might well have been a comfortable mid-table position, but the club were ultimately relegated after being docked 10 points for entering administration.

Escaping the drama at the Raymond McEnhill Stadium, Aaron returned to St Mary's where he was given his debut alongside Jose Fonte by then manager, Alan Pardew, in the penultimate game of the season. He then committed to a new three-year deal with Southampton ahead of the 2011–12 Championship season. Again partnering Fonte, he played the whole of Southampton's first game of the new season, against Leeds United. His first goal proved to be the matchwinner in a 2–1 victory over Coventry City in the FA Cup in January 2012, and in February, he came on as a half-time substitute against Derby County to score his first league goal, Southampton's second in a 4–0 win. He made 17 appearances as Southampton were promoted to the Premier League, but was then moved out to Championship club Crystal Palace on loan for the 2012–13 season. He played five matches in his first month at the club, but then played only once more, and the loan was cancelled by mutual agreement in January 2013. The following month Martin was again loaned out, this time to League One side Coventry City, where he played regularly until the end of the season.

Released by Southampton in January 2014, spells at Birmingham City and Yeovil Town were to follow, before returning to Coventry for an undisclosed fee in 2015. During his time at the Ricoh, the ball playing centre-back played the majority of matches in both the league and cup, as the Sky Blues finished 8th in League One.

However it was not just on the pitch that Aaron made an impression. In 2016 he was named the Sky Bet Football League Unsung Hero of the Month for January, after making several visits to schools in deprived areas around Coventry. In all these visits totalled over 24 hours, but it was not only his time that he donated to community causes, donating £1000 of his own money to contribute to a project for children at the local University Hospital. On receiving the award, Martin pointed out that his motivation was in helping young people to lead healthier lives, saying "It's very important to eat properly. You see so much in the news about kids being overweight. It's really important that they learn how to eat properly, just for them to have a better life".

Aaron left Coventry in June 2016, with Sky Blues manager Tony Mowbray admitting that the decision to let him go was 'the hardest decision he had to make'. However he was not without a club for long, and after joining Oxford United on a two-year contract, he made 30 appearances for the U's despite a ruptured Achilles tendon that ruled him out for almost half of his first season at the Kassam Stadium.

Following the end of his contract at Oxford, he signed for City on 25 June 2018, manager Matt Taylor said: "Aaron is a player with a lot of experience playing at a higher level. He is a good age and is highly motivated to drive the team on to the next level ... He will bring great physicality into the City defence, but is also comfortable in possession". He made his league debut for Exeter on the opening day of the 2018/19 season against Carlisle in a 3-1 home win. He went on to make 23 apperances scoring 3 times in the season.

In 2019/20 he played a further 35 games scoring twice, and also scored in the play-off semi final against Colchester, that took City to Wembley.

“There will be some tough games up here but I”m looking forward to experiencing the difference in opposition in Scotland.”

Speaking about his latest signing, Brian Rice added: “Aaron is an experienced lad who understands the game really well. I’m confident his experience will be a benefit to my squad.”

Port Vale Football Club confirmed that Aaron Martin has agreed to sign for the Valiants upon the expiry of his current contract with Hamilton Academical.

"The experienced defender will join The Valiants on July, 1 2021 having made more than 300 appearances in his career so far, netting 17 goals." 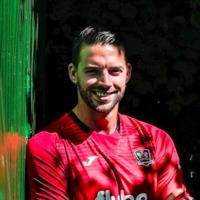 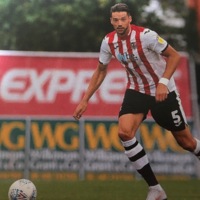