Jonathan Forte began is career in the Rotherham United academy before being picked up by his hometown club, Sheffield United. During this time he made several appearances for the England U16, U17 and U18 sides, before ultimately playing at senior level for Barbados for who he won two international caps.
At domestic level he spent four years on the books for Sheffield United, although, having been used mostly as a substitute, he only made 5 senior appearances for the Blades, registering just a solitary goal against Leicester City. Much of his time was spent on loan at Doncaster and Rotherham, and it was with Donny that he picked up a winners medal, as he helped them to the 2007 Football League Trophy by scoring the first goal (after just 43 seconds) in a 3-2 win over Bristol Rovers. In 2007 he signed for Scunthorpe United, where he scored 9 goals in 98 appearances for the North Lincolnshire club. Again his time at a club was punctuated by loans, spending two spells at Notts County in 2008 and 2009. During his first stint in Nottingham, Forte scored four goals in four league games, including a hat trick on his debut against Barnet. He then re-signed on a one-month loan deal at Meadow Lane in February 2009, getting himself on the score-sheet again with two goals against Bradford City in Notts' 3–1 home win. The loan was extended for a second month until 18 April in March.

After four years on the books at Scunthorpe, Forte was signed for Southampton by then manager Nigel Adkins. However once again his time at a club was interrupted by loan stints, including spells at Preston North End, Notts County, Crawley Town and his native Sheffield United.

After three disrupted seasons on the South Coast, Forte left the Saints and appeared as a trialist for Oldham Athletic in a move that earned him a one year deal with the option of a second season. Forte took full advantage of this deal, and made his debut on the opening day of the season against Colchester United scoring both goals in a 2–2 draw. Forte scored his 9th and 10th goal against Coventry this gave them an emphatic 4–1 victory and stretched Oldham's 12 game unbeaten run. This form led to Forte picking up the Sky Bet League One player of the month for October, and led to his first unbroken spell at a senior football club. His performance for the Latics also reminded one of his former clubs of his ability, and he returned to Meadow Lane in 2016, making 38 appearances and finding the net 10 times for the magpies, including a goal in the Sky Bet League Two play-off semi-final against Coventry City.

Having been released by County at the end of the 2017/18 season he became manager Matt Taylor’s second signing of the summer. The new Grecian’s boss said on Forte’s arrival - “Jonathan is an athletic, dynamic, attacking player with pace and has a lot of experience playing in League Two and a higher standard. “He will complement the attackers currently at the club and his work rate and mobility will provide a slightly different dynamic to our front line. Jonathan finished the season strongly, so I aim to get him fit and firing for us.” Jonathan made his debut for Exeter City on the 4th August 2018, against Carlisle at St James Park in the opening match of the season. He scored his debut goal in the game against Carlisle scoring Exeter's second goal in a 3-1 win in the 26th minute.
Jonathan netted City’s third on his return to the squad at home to Cheltenham Town on the 22nd September 2018. Whilst the goal, a superb solo effort, was worth celebrating on its own merits, it also marked a significant milestone in the club’s history, constituting the 1000th league goal scored by the Grecians since the Supporters’ Trust took ownership of the club in 2003.

Jonathan Forte retired at the age of 33 because of a knee injury, in August 2019.
Forte scored five goals in 27 league appearances for the Grecians after joining from Notts County in July 2018. 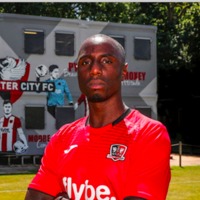 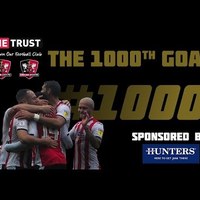 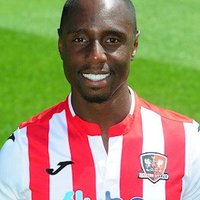 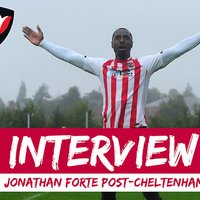 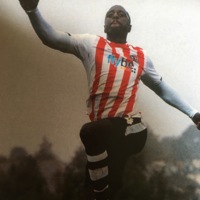