Ok Nicky Law began his career with Sheffield United however he failed to make a significant breakthrough into the first team and had loan spells with Yeovil Town and twice at Bradford City.

In 2009, he joined Rotherham and later moved to Scotland to join Motherwell. Whilst at Motherwell he was named in the PFA Scotland Team of the Year in 2011/13 and the following summer joined Rangers. He was released by Rangers in May 2016 and re-signed for Bradford City on the 29th June 2016, played for 2 seasons and was released at the end of the 2017/18 season.

He then joined Exeter City on 2 July 2018. On signing for the Grecians, manager Matt Taylor said

"He has signed a long-term contract, so I see him playing a big part in terms of our progression as a club over the next couple of years.” Matt Taylor also thinks that Nicky’s proven record in higher divisions will help City to push on in the 2018/19 campaign. He continued: “Nicky has vast experience and he hasn’t missed many games through injury. He’s someone I can rely on, a good character, and I can trust him. But more importantly he is a good player. “He is technically very good and positionally he is excellent as well. He will provide us with a bit of an attacking threat, he could play in the centre of midfield, he could play left, or he could play right. “I’d like to think his best years are ahead of him. The way we are going to train here we will give him a real impetus in terms of his game going forward. He has made a big commitment with his family. He is moving down with his partner and child so I’m delighted that he has invested in the club and the area.”

Nicky is the son of Nicky Law Snr. Law played as a defender between 1981 and 1997 for Barnsley, Blackpool, Plymouth Argyle, Notts County, Scarborough, Rotherham United, Chesterfield and Hereford United. Nicky made his debut for Exeter City on the 4th August against Carlisle at St James Park in the opening match of the season.

He scored his debut goal in the game against Carlisle scoring Exeter's first goal in a 3-1 win in the 16th minute.

Finishing the season as player of the year, he was instrumental in getting Exeter to the playoff final the following season.

In January 2021, Nicky left Exeter City and the club made the following statement.


"Exeter City can confirm that midfielder Nicky Law will leave the club on January 31 to pursue an exciting playing and coaching opportunity with USL club Indy Eleven in the United States.

Nicky was one of manager Matt Taylor’s first signings at the club, joining in the summer of 2018 and quickly became a fan favourite after scoring on his debut against Carlisle United.

He has gone on to make over 100 appearances in red and white, scoring 20 goals and providing numerous assists and was pivotal in the Grecians reaching the play-off final last season.

Manager Matt Taylor said: “This is a great opportunity not only for Nicky but also for his family.

“We are extremely disappointed to be losing him but he is rightly thinking about the latter stages of his career. It was an offer he simply couldn’t turn down because the coaching opportunities over in America are second to none.

“He has been a huge influence at this club and everyone who has seen him play will see how much of an impact he’s made.

Ever since he joined we’ve seen his quality. Nicky has contributed to so many key moments in games during his time with us. When the team has needed something extra then Nicky has delivered. You can see why he’s played at a higher level because he has the ability to do things with a football that not many at this level can.

“We are certainly grateful to him for his efforts here and we wish him all the very best.”

Everyone at Exeter City wishes Nicky the very best of luck in the next chapter of his career."

Nicky made the following statement at the time.

Nicky Law thanks Exeter City fans for their support as he departs the club, moving to the USA to become a player/coach for USL side Indy Eleven.

Nicky Law was one of Manager Matt Taylor’s first signings when he took over the club in the summer of 2018 going on to make over 100 appearances for the club and scored 20 goals.

Calling it one of the best periods of his career, Nicky said: "From day one it’s been a fantastic experience for me."

About your support, Nicky said "The fans have been brilliant with me, singing my name from day one. They've often made me feel 10 times the player I am sometimes."Nicky also shared his disappointment about not being able to say goodbye as games continue to be played behind closed doors.


When Nicky left he wrote the following.

"It's with a heavy heart I write this message to you after yesterday's announcement that I will be leaving Exeter City - a club I have proudly loved playing for the past two and a half seasons.

Your support from my first match to my last has been unwavering the way you've sang my name and supported me personally is something I'll never forget, you made me feel ten times the player I am at times and for that I am truly thankful.

I would like to thank the manager Matt Taylor for the opportunity to come down to Devon and play for this club.

We're in a tough spell right now but we've had a few of those in my time here and have always bounced back well and I'm in no doubt with Matt in charge and the staff around him and the quality of player we have it's only a matter of time until we start winning again and head up the table.

Thank you also to all of Matt's staff, the ones still here and also great people who in my time have come and gone aswell.

A huge thank you to Matt and the board for allowing me to leave at this stage of the season for an opportunity that I felt was too good to turn down at this point in my career and allow me to try something that I've always wanted to do since I started out in the game which was to play abroad and try a different culture and style of football whilst I still had the chance.

I know how difficult it was for them and how they didn't want me to leave but it's a sign of the class of the football club that they wouldn't stand in my way even though they wanted to,

When I said it was something I felt I needed to do they reluctantly agreed and it was such a difficult decision to take to leave Exeter believe me.

I'm sure you will all be following from a distance how Indy Eleven are doing from now on, the club has some big plans and I'm excited to be a part of their journey, hopefully I can have the same effect there for the club and also on there supporters like I have here with you guys in Exeter.

Lastly, but certainly not least, my team mates, past and present, THANK YOU for helping me settle in so quickly from day one, only a few boys remain that were there from the start and I have made friends for life with a lot of you, a great bunch of guys who always give their all win lose or draw and every single day in training, all I hope is that you feel that I was a good team mate and you have enjoyed your time with me as I have all of you,

Sorry for the long message. I just want to say thank you to everyone again for the last two and a half years! 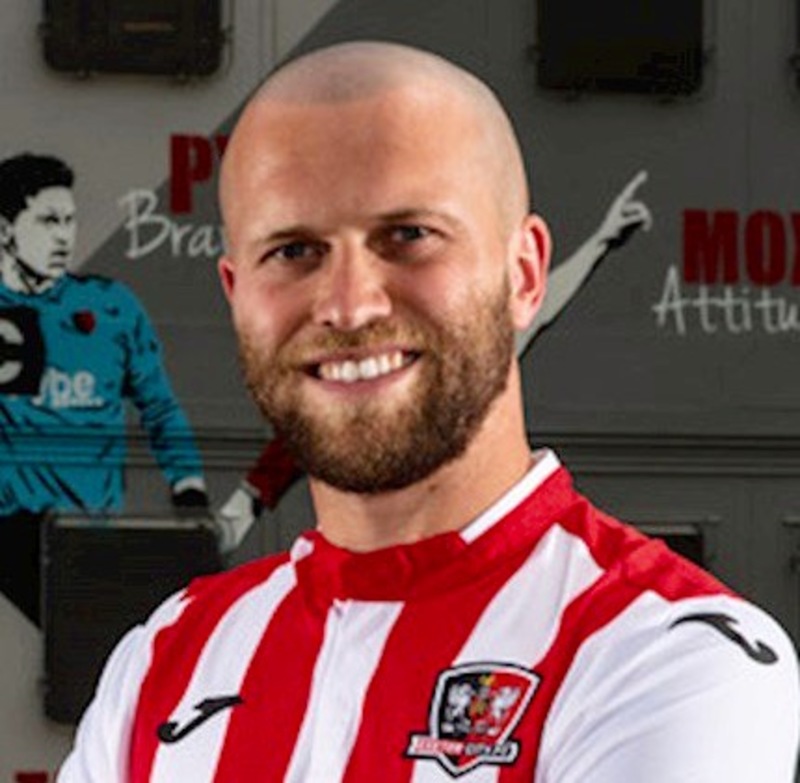