"The pleas of guilty to fraudulent trading by John Russell and Mike Lewis, who took over Exeter City in May 2002 and left a year later with the club on the brink of ruin, seemed last week to provide appropriate final words on a grimy period.

Following the collapse of ITV Digital, Football League clubs were tumbling over each other into administration, revealing astounding mismanagement and, in some cases, worse.

Russell had a criminal conviction when he arrived at St James Park, having in March 1999 received a 15-month prison sentence, suspended for two years, after pleading guilty at Leeds Crown Court to two counts of obtaining services by deception in a £180,000 hire-purchase fraud. Both men had football form, too. Russell had been the owner and chairman of Scarborough from March 1994 to 2000; he resigned following relegation to the Conference and left the club insolvent, owing creditors £1.25m. Lewis, after a career in clubs' commercial departments, had latterly been at Swansea City, where a brief tenure as managing director ended in what he described as "complete disaster". Swansea's owners handed Lewis the loss-making club, he sold the shares for £1 to Tony Petty, an English ex-pat based in Australia, and the club ended up insolvent with debts of £1.7m. Swansea fans were so incensed that for a time Lewis feared for his safety. Soon after, Lewis teamed up with Russell to find another club. They approached Lincoln City first, but were rejected by the supporters trust, which had taken over, so they went to Exeter, another club in trouble. The Grecians were losing money, piling up debts; the majority owner and chairman, local jeweller Ivor Doble, was 77 and had loaned the club £483,000. Desperate for a solution, he did a deal to give Russell and Lewis control. Last week at Bristol Crown Court, Russell pleaded guilty to a further criminal offence, obtaining a pecuniary advantage by deception, the charge that when he took over he "Dishonestly obtained for himself . . . membership of the board of directors of Exeter City AFC by deception, namely by falsely representing that he had substantial funds to introduce to the club." The pair had no substantial funds to invest.

Their first major move was to appoint as Russell's co-chairman Uri Geller, the celebrity spoonbender whose son, Daniel, had chosen Exeter as his club to support. Geller recruited the singer Michael Jackson as "honorary director" and, with the illusionist David Blaine, they performed a concert in June 2002 to raise money for the club and two charities. The extravaganza did not boogie the club's troubles away. There were delays paying the charities and bills went unpaid, including from the company which produced the concert programmes, who instructed bailiffs.
The builders, Mowlem, grew restive about £700,000 owed for two stands opened in 2001. When Russell and Lewis arrived, they said they would take no salaries, but after a while they admitted the club was paying their "accommodation and general expenses". One of their economies was to stop employing NatWest Bank employees to count the gate money at matches and to dispense with the services of Securicor to take it away. After that, they would either take the cash away in their cars or leave it in the club's safe over the weekend, then bank it themselves later. In April 2003, the FA's financial advisory unit produced a report which concluded that the club was failing to meet its debts and should seek advice from an insolvency practitioner. The FAU strongly recommended that a security firm be employed to bank gate money, and criticised the failure to hold regular board meetings. The six directors other than Russell and Lewis described the report as "deeply disturbing" and resigned. Russell and Lewis said they were working "24/7" and would "battle on", but on May 14 2003, with City relegated to the Conference, Devon & Cornwall Police raided St James Park and arrested Russell, his wife Gillian and Lewis. Their homes were also searched. Last week the police revealed that "a number of complaints" had been made and "it was alleged that Russell and Lewis had committed a number of offences" during their time in charge. Uri Geller told me he was one of the people who reported his concerns to the police. "I cannot add any more on legal advice," he said, "but it was a very unfortunate situation." The Grecians, £3.2m in debt by then, came perilously close to collapse. Russell and Lewis's year in control left a trail of creditors grimly familiar at other clubs: local and national businesses, the ambulance service, electricity, water and phone companies. Almost £450,000 was owed in tax and VAT; £66,066 was owed to the local university. The £13,414.59 outstanding to Devon & Cornwall Police for match duties cannot have generated much sympathy at HQ. A supporters trust - formed, like many, in the teeth of crisis - agreed to buy Doble's majority shareholding for £20,000 and immediately put the club into administration. The creditors were eventually paid just 7.12p in the pound. The trust struck lucky in January 2005, when City drew Manchester United in the FA Cup third round. The live, televised 0-0 draw at Old Trafford and a replay, which United won, earned more than £1m and placed the club on the road to health. The police investigation continued, hampered, the officer in charge, Detective Mark Sandford, said last week, by a lack of "the most basic financial records". Police had been unable even to determine how much money had gone through. Finally, Russell and Lewis were charged with four offences and Gillian Russell with two, and last week, at the beginning of the trial, Russell and Lewis pleaded guilty to the charge that they were "Knowingly party to the carrying on of the business of Exeter City with intent to defraud its creditors". Russell pleaded guilty to the further charge of obtaining a pecuniary advantage by deception. Other charges, of conspiracy to defraud, were left to lie on the file. The prosecution accepted not guilty pleas from Gillian Russell to theft and false accounting"


"After their apperance in Bristol Crown Court The ex-chairman of Exeter City Football Club has been jailed for 21 months for fraudulent trading. John Russell, 51, from West Yorkshire, and his deputy Michael Lewis, 65, from Swansea, both pleaded guilty to fraud. Before being appointed chairman in 2002, Russell falsely claimed he had assets which could be used as personal guarantees for the club's debts. Lewis was sentenced at Bristol Crown Court to 200 hours of community work for playing a lesser part in the fraud. Russell, of Cannon Hall Close, Brighouse also pleaded guilty to obtaining a pecuniary advantage by deception. A former Scarborough FC chairman, Russell had claimed to own a hotel, property and businesses. Paul Dunkels, prosecuting, said: "He was broke. He had no assets, no money and no bank account and certainly had no money to invest in Exeter City." Russell and Lewis, from Loughor Road, Gorseinon, continued trading and paid themselves generous consultancy fees despite knowing the club was insolvent and unable to repay loans. The court heard how they moved money from accounts to buy themselves time, cheques were bounced and money earmarked for the club's academy was illegally transferred. They left the club £4.5m in debt, but the men blamed the previous regime for the club's position. In sentencing Russell, judge David Ticehurst told him he had betrayed the club's fans and treated it as his own personal domain. During the pair's time in charge, singer Michael Jackson was made an honorary director of the club, and visited the club's St James Park with Uri Geller, who was appointed vice chairman. They said they believed they were caught after Uri Geller reported them to the police. The supporters' trust later took over the club and agreed to pay back 7p in the pound to creditors".

From a BBC Article after their court apperance in Bristol.


And from an article written by John Russell and Mike Lewis (Programme article against Southend last game of the season, 2003)

"It is almost a year to the day when we took control of your football club. Since then we have seen many changes and some trauma along the way. At no time did we believe that the club would be in the position it is today, that is fighting for league survival. Money was found for players sought by successive managers. The squad strength rose to 32 at its peak and we still struggled. Yes there were times when we looked like a relegation side and did not deserve to move up the league table, but recently we have seen under Gary Peter's leadership a vast improvement in the performance of the team in terms of discipline and latterly results. It is our intention to offer Gary a further contract come what may as we have all seen the qualities this man brings to a lower division club. We feel the majority of the fans feel the same. A fan of over 40 years service to the club said to us recently... "Perhaps it will be a good job if we go down because this club has been on the brink of Conference football for some time now and the club may benefit from re-structuring"....We do not entirely agree with that sentiment but understand the philosophy behind the remark. Huge debts were inherited by us on arrival and more hidden "debts" came to light over the subsequent twelve months. We have tried, with some success to reduce these debts, but for the club to move forward we need some clear water between the debt burden and operational needs. What form that will take will be revealed in the next two weeks. All third division clubs struggle financially and we are no exception. Some hard decisions will have to made during the summer come what may. Friends at Board level have been hard to keep. Some had their own agenda and were never "onside". There are exceptions and we would single out Murray Couch and Sean Kilbride as two who saluted the flag. One man who has dealt with us in an open and honest manner and for years single-handedly kept this club afloat deserves special mention. He has become a friend and kept his promises of not interfering with day to day activities of the club. That person is Ivor Doble. Thank you Ivor! Last but certainly not least we salute you the fans. You have been magnificent. There have been times when you have travelled to away grounds knowing full well that a minor miracle was needed to be performed for the team to gain points. Yet you still sang and made a hell of a noise. Your total understanding of the Club's problem's have encouraged both of us to give it our best shot. If that "best shot" isn't good enough then perhaps a change is needed. However in the present stormy waters that many football clubs are experiencing, there is an acute shortage of people willing to take the plunge and invest in a club. We have already said that should there be anyone who strongly feels that they could do a better a job we would only be to pleased to talk. At 4:45 this afternoon we will hopefully be raising the roof at St James Park. should the unthinkable happen then do not despair because, to coin a phrase we will return" 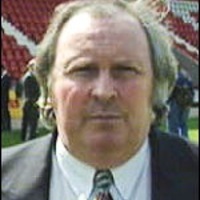 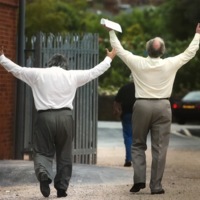 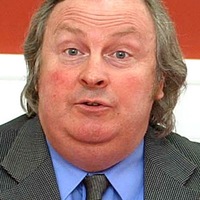