Michael’s father James was born in Monaghan, Ireland. In 1855, aged 17 he left for Colchester to join the British Army.
In the late 1870’s he moved with his wife and first son Michael John McGahey to Stepcote Hill Exeter.

Michael went to Blue Boy School then Hele’s, and at 17 became a solictor’s clerk in the firm of Dunn & Baker in Castle Street. One of the senior partners took an interest in him and helped Michael through night school and later made him a partner.

He became involved in the life of the city, serving as a local councillor, an Alderman and Freeman of the City.

He had always enjoyed watching football at St James Park. He later joined the board and became Chair in 1910.

In 1912 the FA conducted an enquiry into the affairs of Exeter City following complaints made by three Directors. The enquiry took place at the Great Western Hotel, St David's Station on June 1st. The club had to provide their account books. It had been no secret that there was a boardroom split among the Directors.
The charges against some Directors concerned illegal bonuses paid to players for winning games. This was reported by Mr T Oliver with further statements being signed by Mr WH Cook and Mr W Fenwick, the alleged payments were said to have been paid in the seasons, 08/09, 10/11 and 11/12.
The result of the enquiry was the club were found to be producing incomplete cash books were found to be incomplete and unsatisfactory. The former Chairman, Captain Harvey had admitted that the bonuses had been paid. And it was further admitted that further payments had been made to players after the FA Cup tie against Reading in 1910/11. And that a fraction of the gate receipts from the match against New Brompton played on 11th September 1911 had not shown in the accounts. The enquiry concluded that this had happened with the knowledge of some Directors, Cook, Fenwick, Thomas, Parkhouse and Oliver without the knowledge of the others. The charge against Oliver was that this was done to pay bonuses. As soon as McGahey was made aware of this he bought it to the club board meeting and the practice was stopped.
The FA approved of the actions that McGahey had taken and censured Cook, Parkhouse, Fenwick, Oliver and Thomas for their improper action. They ordered the club to update its accounts and fined the Grecians £20.

In the summer of 1914 Exeter City were invited to represent the FA on a tour of Argentina.
As part of an extension to the tour, agreed by Michael, the Grecians became the first side to play Brazil.

On 4 August 1914 as Britain declared war on Germany, an English football team was in the middle of its return voyage from a tour of South America. Their journey back would involve narrow misses with warships - and their lives as footballers would never be the same again.
The 15 players in Exeter City's touring squad were on their way back from a tour of Argentina and Brazil, during which they suffered a 2-0 defeat to the first-ever Brazilian national team, when news reached them about discord back in Europe.
The assassination of Austria's Archduke Franz Ferdinand was escalating into something that would become known as World War One.
"The news of declaration of war between Germany and France caused great excitement between the mixed body of passengers," wrote club chairman Michael McGahey in a letter published by the Exeter Express and Echo newspaper shortly after the team's return.
" about 12 midnight when the wireless message was received as to the declaration of war between England and Germany... the news had the most sobering effect.
"Everybody felt the world was fated with a terrible ordeal, the end of which no man could foresee."
Alone on the ocean, the fate of the ship, its passengers and crew depended on which nations' ships they encounter first. If it was an enemy nation those on board, especially young fit men of military age, could spend the war in internment camps.
Mr McGahey said it was a "startling adventure" as the team's ship was twice fired on by warships - once near the English Channel - as they put warning shots across its bow.

Luckily for the players, on both occasions the ships were French - Britain's allies. The ship was allowed to continue its journey although the crew had been told to stay away from Southampton and landed in Liverpool instead.
'Up-and-coming team'
Mr McGahey said as the players headed back to Exeter by train, "they were looking forward to the start of the 1914-1915 season, which was in a few days' time"

With all things Exeter City it was not as simple as the chair thought.


In 1919, his wife Isabella died during a widespread flu epidemic.

Michael spent over 20 years as Chair, fighting constant financial and other battles, in 1926 the club faced severe financial problems after the stand burnt down.
Michael made an appeal to the public for support.

In 1935 the club faced a winding up order, which it fought and won.

Michael resigned as chair in July 1936 and was elected the club's first honorary President. 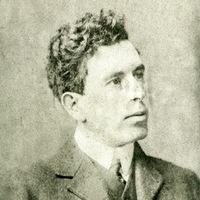 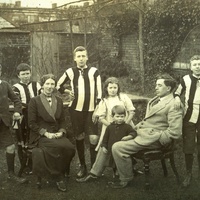