Born Exeter in 1889. Private in the 1st/7th Bn. Sherwood Foresters (Nottingham and Derby Regiment). Service Number 3071. Buried at Lindenhoek Chalet Military Cemetery located in West Vlaanderen, Belgium along with 249 casualties. Webb had enlisted in Nottingham with the Robin Hoods, as this territorial battalion of the Notts & Derby Regiment was called, on 14th October 1914. It was his work as a lithographic artist that had taken him there earlier in the year.Having trained for 18 weeks, Webb arrived in France on 28th of February and proceeded with his battalion to the Ypres area.The Robin Hoods were the first complete territorial division in the conflict to see active service.

Private Webb was at the Front for less than two months.He died, in action, at what became known as the Battle for Hill 60, south-east of Ypres.His death was announced in the Western Times on Wednesday 28th April 1915, and on the following Sunday the congregation at the Providence United Methodist church in Exeter listened to a eulogy by the pastor.Among them, most likely, were Webb’s parents, three sisters and two brothers.He had been a member of this church for seven years.

An article in the Providence Circuit Magazine described the day he died: ‘On the morning of his death he conversed with his friend of home and loved ones.A few hours later he received the fatal shot, and now lies buried in a grave, prepared by his comrades, away somewhere in Belgium.’A family headstone in Exwick Cemetery bears an inscription for him.From a passage in the Song of Solomon, it reads ‘Until the Day Breaks’.

After George White’s death in October 1914, John Webb was the second Exeter City player to sacrifice his life.A robust centre-half, he’d been ‘tried in the Plymouth League team’ towards the end of the 1913/14 season – under White’s captaincy.Webb, the Express & Echo goes on to tell us, ‘created such a fine impression, for he was strong, bustling, and in the pink of condition.He was regarded, in fact, as one of the “finds” of the season.’Perhaps, before, he’d played against City for his first club Friernhay, a club, now defunct, which in the first decade of the last century fielded one of the strongest sides in Exeter. John Webb is remembered on his parents grave in Exwick Cemetery, Exeter. As well as at Exwick, John Webb is commemorated on the memorial at St James Park, on the one in St David’s church in Exeter, and on the Nottinghamshire Virtual War Memorial. While in Belgium, he is remembered at the Lindenhoek Chalet Military Cemetery, not far from Ypres.
Died 18/04/1915 aged 26 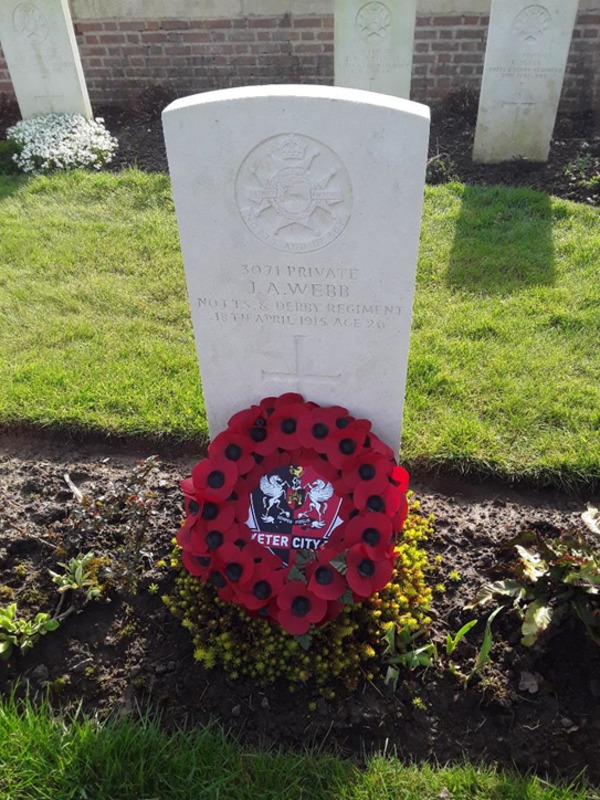