While a lecturer at Exeter's St Luke's College Evelyn Lintott played for Exeter City
Reserves during the 1905/06 season.

Lintott (1883-1916) was born on 2 November 1883 in Godalming, Surrey and was killed serving with the British Army in France on 1 July 1916. He was a talented half back, playing for a number of English League clubs before the First World War being capped by England at both amateur and professional level.

Evelyn Lintott  joined the 15th (Service)
Battalion of the West Yorkshire Regiment,
better known at the 1st Leeds Pals on the 14th September 1914 and was promoted to sergeant soon after.

Having subsequently been commissioned (reportedly the first professional footballer to do so) Lintott was promoted to lieutenant on 20th December 1914.
Lt Lintott set sail for Egypt in December 1915 and spent three months in the country before finally leaving for France in March 1916. After acclimatisation on the Western Front, the Leeds Pal’s eventually found themselves facing the fortified village of Serre on 1 July 1916 for the opening day of the Somme offensive. Tasked with capturing the village, they were to suffer heavy casualties in the attack, losing 13 officers and 209 other ranks killed. Evelyn Lintott was among those to lose their lives.

Lintott’s death was later reported by Private Spink, who said the officer had been struck in the chest and killed by machine gun fire during the advance. Soon after, the Yorkshire Post published news of Lintott’s death to their readers: “Lieutenant Lintott’s end was particularly gallant. Tragically, he was killed leading his platoon of the 15th West Yorkshire Regiment, The Leeds Pals, over the top. He led his men with great dash and when hit the first time declined to take the count. Instead, he drew his revolver and called for further effort. Again he was hit but struggled on but a third shot finally bowled him over.” Evelyn Lintott has no known grave and is commemorated on Pier and Face 2 A 2 C and 2 D of the Thiepval Memorial to the Missing 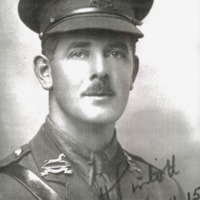 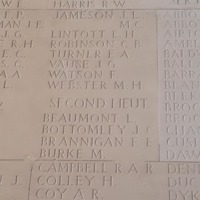