Dacre was a volunteer at Exeter City, supporting and then taking up the role that Barry Sansom left in 2004.
He worked tirelessly as a Volunteer estates manager.

He was also involved in a large number of fund raising projects, some of which have continued with the support of his brother Andy, who also works as a volunteer.

Grecian Goal was created by Dacre Holloway as a way of raising money for our Club. His first GG funded project was to drain the, then very boggy, training pitch at the Cat & Fiddle.

Thanks to everyone for the very kind messages about Dacre. We’ve been overwhelmed by the number of emails, phone calls and postings, which have been wonderful to read. Thanks too to everyone who joined in the 1 minute’s applause at the Lincoln match – to be a part of that from Dacre’s spot pitch-side was a very emotional experience and a fitting tribute to him. We knew he did a lot for people, and of course for the club, but the extent of this has surprised everyone, even those who thought they knew him well!

We were amazed that there was ‘standing room only’ at the service, and know that many more would have attended if they could. Although it was obviously a very sad occasion for everyone, it was also a very moving and heart-warming one. The Celebration at the football club afterwards was an opportunity for people to make their own tributes to Dacre; he was many things in his life: a family man, loyal friend, Royal Marine, Teacher, Army Education Officer, Careers Adviser, Language Lecturer and of course Exeter City Football Club supporter.

All those who stood up to pay tribute to him described his organisational skills, patience, understanding, steadfast friendship, loyalty and generosity. We all know he would have preferred to duck this bit, shrugging his shoulders and walking away from any praise, but just for once people had to be allowed to say how highly they regarded him, because it is clear he touched many people’s lives in a very positive way.

The tributes were both moving and humorous, and quite rightly celebrated his many achievements, but what became clear was the way he approached all these thing – the organised, quiet and unassuming way, never seeking any acknowledgement, praise or reward and always totally reliable and dependable. We’re sure that all of you who knew Dacre are extremely proud, as we are, to have known and worked with him.

Frances Farley said that Dacre did the work of ten people and is irreplaceable. Dacre did what he did because he loved the club and because he was determined to see it survive and thrive. Maybe one person cannot take on all that he did, but the way to go forward is for 10 or 20 to take on one small part. It’s great that people have already volunteered to take on some of the things he did; sharing the work and responsibility helps to give the club a strong core.

He has left all of us with a great legacy and it is our dearest wish (and it would have been his too) that those of us fortunate enough to have known him will be able to use the example he has set to continue his good work.

Of the donations collected in memory of Dacre, half will go to The Gurkha Welfare Trust (Dacre spent 20 years of his Army career working with the Gurkhas) and half will be put towards a specific project in his memory at Exeter City FC. We will be discussing some ideas with the club as we all want this to be a lasting and effective project that reflects his commitment to ECFC.

We have also been in contact with Ian Parsons who suggested planting a tree with a plaque at the Cat and Fiddle ground; several of you have already pledged a donation to this, which is lovely, and we very much like the idea. If Dacre was sorting this out we know he would find some way of getting the tree and plaque supplied free or at a discount, so that he could put most of the money towards the tools! It would be great if we could do the same.

Once again, our sincere thanks to all of you for your messages and support in the last month; it has been a great source of comfort and pride for us all. 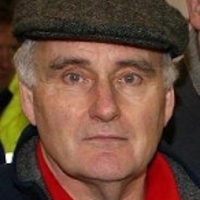 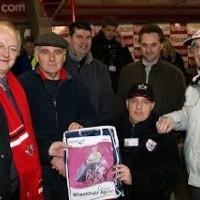 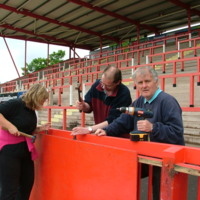 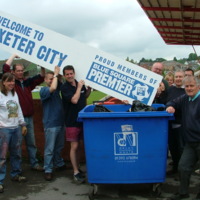 I had the pleasure of Dacre taking me round the whole of the ground for my 50th birthday in 2008.Great company and he is sorely missed.