The day we played Trinidad...

Much has been made of the centenary of Exeter City’s trailblazing trip to Argentina and Brazil in 1914. But it is also worthy of note that the club has a long tradition of other international fixtures including a little known game against a touring team representing Trinidad.

Most of these games have been mentioned in various publications on City’s history but one that seems to have been lost in the mists of time is a home game on 16 September 1953 against a Trinidad Touring XI.

Trinidad and Tobago had become a combined British colony in 1889 and didn’t achieve independence until 1962 so England was an obvious destination for a historic visit.

A squad of twenty Trinidad players made the trip for a two month 14 game tour. They were all amateurs given three months leave of absence with pay by their employers. One of the first things they had to get used to was playing a 90 minute game. The usual length in Trinidad was an hour.

Much of the early part of the tour took place in the Westcountry starting with a game against Dorset at Weymouth. A crowd of 7000 turned up to see the home team win 7-3. They moved on to Bristol Rovers (lost 4-1) before arriving in Exeter via games in Newport against Lovells Athletic and Barnstaple (lost 2-1). Later matches were played at Torquay (won 4-0), Plymouth Argyle and Cornwall (won 6-3). In all Trinidad won 5, lost 6 and drew 3 of their games. They finished with a highly creditable 2-2 draw against the England Amateur XI at Wimbledon’s Plough Lane.

In the run up to the Trinidad game Exeter had lost 5-1 at Bristol City. Stanley Matthews had watched the game and told the Express and Echo that Exeter were “poor opposition”.

The game against the tourists had a 6pm kick off and attracted a crowd of 1,998 (Receipts £152 14s 6d). City fielded their Southern League XI; in effect their reserve team. City lined up with Singleton, Storey, Rowe, McLean, Davey, King, Priestly, Knight, Dailey, Samuels and Parker. A teamsheet was produced for the fixture.

The result was a 1-1 draw but the headline in the following day’s Echo was “Well played Trinidad!” The paper enthused “Your team made a grand impression...speed, intelligence, ball-craft and the will to work”.

It wasn’t a great start by Trinidad. City forward Samuels scored “directly from the kick off; the ball was in the back of the net without an overseas player touching the ball”.

The Echo underlined that “to the credit of Trinidad they did not lose heart” and they equalised ten minutes after the interval with a goal by Carr. “How wrong we were in anticipating a runaway City triumph” mused the paper.

Trinidad were praised for their “methodical football at speed”. City defenders were reported to be “desperately hard pressed by an attack which chased and kept on chasing”.

City fans obviously liked what they saw as the journalist observed that “the crowd’s prolonged applause at the end of an entertaining struggle was a fitting tribute to a team whose members played and enjoyed their football”. 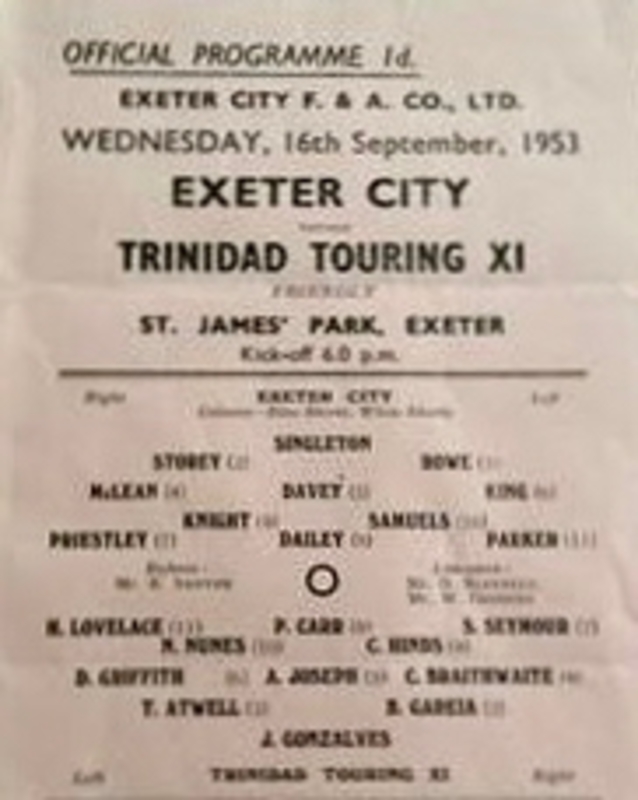