The arrival of Vienna born goalkeeper Bobby Olejnik at St James Park in June 2015 certainly provided a rare Exeter City link with Austria but it’s not the only one.

In fact in the mid-1950s the Grecians hosted not one but two Austrian sides in just over a week – matches played in decidedly challenging conditions.

First up was Grazer Sportklub from Graz. They played a floodlit fixture (still a novelty – City’s lights had only been inaugurated in 1953) at Exeter on Monday 14 February 1955.
The Express and Echo described the pitch as “treacherous” and “wholly unsuited to football”. Apparently “pools of water lay on the surface...the ball played all manner of unexpected tricks, and the game was a travesty of soccer”.

Graz had once played in the highest Austrian League but their “close passing and ball jugglery were of no avail on a night like this”.

City won 4-1 with goals from Peter Thomas, Angus MacKay (2) and Andy Donaldson. Donaldson was actually a substitute, replacing the injured Ray John. The use of substitutes was restricted to friendly games – it was another ten years before they were allowed in the League.

The Echo said “Exeter’s victory was richly deserved, although one felt sorry for the Grazer side, unused as they are at home to the sort of pitch they had to play on last evening”. Frustrations boiled over in the second half when “tempers became frayed”.

The game was said to be “a financial flop too because the gross attendance was only 1,430, and the receipts £140 4s.”
Two days later things got even worse for Grazer when they lost 7-0 at Brentford. The Club never regained their glory years and now languish in lowly Austrian non-league football.
A week later on Monday 21 February City once again welcomed an Austrian side – this time F.C. Columbia from Vienna.

Columbia is one of the oldest teams in the capital – formed in 1908. But even their experience couldn’t prepare them for the state of St James Park – although this time it was snow and ice that made football difficult.

It wasn’t much fun on the terraces either. The Echo reported “Watching floodlit football on the snow is a he-man’s pastime, and well the thousand spectators knew it at St James’s Park last night. They shivered as they looked on, Spartans who paid to endure discomfort”.

Two inches of snow covered the playing pitch at the start of the game and “more fell during the play, and the miracle is that the soccer-cum-ice hockey show ran its scheduled course. City skated to a 4-2 victory. The home players were stronger, speedier, and surer of foot than the Columbia visitors”. The headline summed the game up as “ballet on ice”.
The home goals were scored by Peter Thomas, Angus MacKay, Charlie McClelland and “the goal of the bunch, a great left-footed shot from Andy Donaldson into the top corner of the net”.

Columbia too has fallen down the leagues and now plies its trade in Austria’s fifth tier. But a tradition of international friendly games has continued. In 2009 they hosted Arsenal, losing 7-1 and in the following year played Borussia Dortmund (lost 4-0). Exeter City, of course, has also continued in the same vein with Brazilian teams the most recent opponents of choice. Thankfully the playing conditions have vastly improved!

The ECFC Museum has a copy of the simple 4 page programme for the Grazer game in its archives but not the Columbia one. If anyone has one or anything else of historical interest they would be willing to share with the Group then please contact us at Museum@ecfc.co.uk or care of Reception. 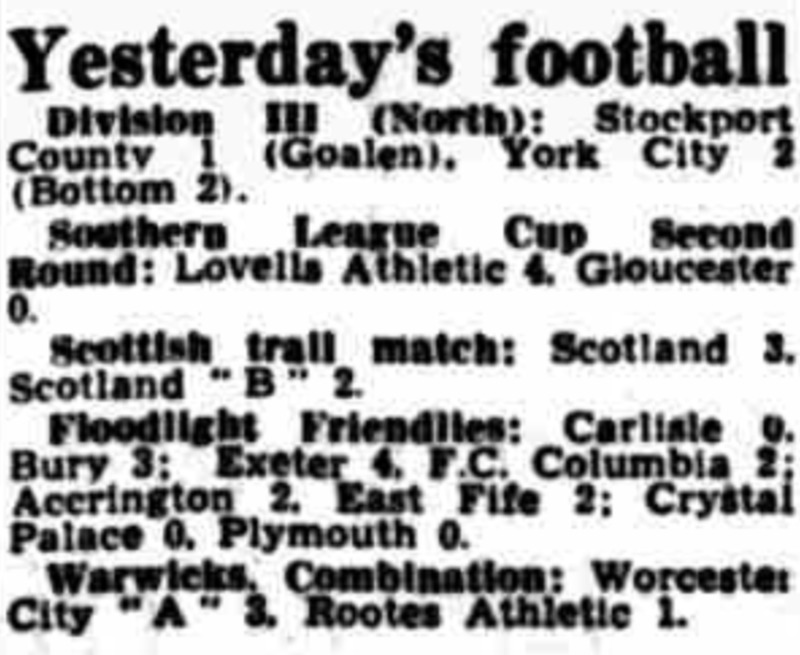