Pride Park Stadium, currently known officially as the iPro Stadium for sponsorship purposes, is an all-seater football stadium located on the Pride Park business park on the outskirts of Derby, England. It is the current home of Football League Championship club Derby County, who moved to the stadium from the Baseball Ground upon its opening in 1997. With space for 33,597 spectators, Pride Park Stadium has the sixteenth-largest capacity of any English football stadium, the twentieth-largest of any stadium in the United Kingdom, and the one hundred and twenty-first-largest in Europe. 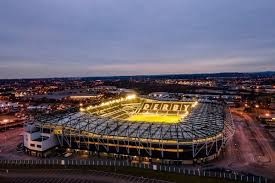