Shrewsbury moved to the Greenhous Meadow Stadium in 2007 following ninety seven years at the Gay Meadow ground. The stadium has a capacity of 9,875, and is comprised of four stands of roughly equal height. The record attendance at the stadium was for Shrewsbury’s League Cup tie against Chelsea, in which the club added additional temporary seating to help accommodate 10,210 spectators overall. 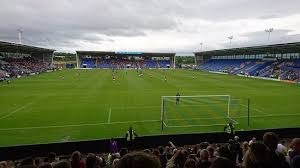